The U.S. Justice Department and the Consumer Financial Protection Bureau (CFPB) are about to investigate claims that Warren Buffett's Berkshire Hathaway Inc. (NYSE: BRK.A, BRK.B) is tied to a "disturbing business model" in the housing market that exploits minorities.

On Tuesday, Representative Maxine Waters, Democratic leader of the House Financial Services Committee, and three fellow members called on the feds to investigate the business and lending practices of Clayton Homes in Tennessee. Clayton Homes is the United States' largest mobile home manufacturer and it – alongside its in-house lending business, Vanderbilt Mortgage – is owned by Berkshire. 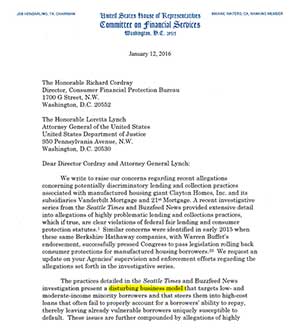 In their letter, reported The Seattle Times yesterday, the representatives called the companies' "disturbing business model" indicative of financial exploitation in light of Clayton's "uniquely broad control of the manufacture, sale, and financing of manufactured homes." Specifically, the committee members accused Clayton Homes of exploiting black, Latino, and Native American borrowers by driving them into subprime loans they cannot afford and harming communities by repossessing homes after borrowers default.

A Buzzfeed article published on Dec. 26 of last year alleged that Vanderbilt Mortgage typically charges black people who make over $75,000 a year slightly more than white people who make only $35,000.

Clayton Homes released a statement in response to The Seattle Times saying it was disappointed the newspaper's reporting is being "accepted as fact rather than challenged as an unfortunate cobbling together of incomplete data and outlying anecdotes."

"Race and ethnicity are never considered in pricing or structuring our loans," the company said.

Bitcoin Forecast for 2016: Last year Bitcoin's fortunes turned as the financial community awoke to the potential of Bitcoin's underlying technology, the blockchain. That's why the Bitcoin price rebounded in 2015, and why the digital currency's prospects for 2016 and beyond are even brighter. Here's why some Bitcoin price predictions are ranging as high as $3,600…