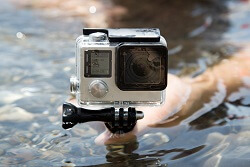 GoPro cited "lower than anticipated sales of its capture devices due to slower than expected sell through at retailers" for the shortfall.

The company also said it would slash its workforce of more than 1,500 by 7%. As a result, GoPro will take an expense charge between $5 million and $10 million. That will mostly be due to severance costs.

Analysts and investors had been cautious on the GoPro stock price heading into the crucial holiday season, but the troubles really started surfacing last summer.

The company's July launch of its ice-cube-sized camera disappointed. Dubbed the Hero4 Session, the camera was GoPro's attempt at an entirely new design from its traditional action-camera models.

GroPro trimmed the Hero4 price by 25% in late September. In December, the company slashed the price again. The Hero4 now sells at half of its debut price of $400.

The Hero4 was expected to be a hot seller during the holidays. But projections for the Hero4 cooled ahead of the crucial shopping season and GoPro trimmed its guidance.

In October, GoPro forecast that revenue would decline 17% year over year in Q4. That was a stark turnaround for the company, which had averaged quarterly growth of 47% over the previous eight quarters. Wednesday, GoPro further reduced its Q4 guidance.

And while the GoPro stock price is already down 31% in 2016, GPRO still has farther to fall...

In a note to clients Wednesday, Goldman Sachs cut three years' worth of GoPro earnings estimates. The investment bank also slashed its price target on the GoPro stock price nearly in half.

The firm noted the charge GoPro was taking for excess inventory was small relative to the inventory the camera maker actually has.

"We remain on the sidelines in the near term as it appears unlikely this will be the last estimate cut, given the relatively small amount of inventory reduction," Goldman said.

A number of other firms also lowered their GoPro stock price targets and ratings:

Wall Street has finally turned bearish on the GoPro stock price, but this is a position we've held at Money Morning since the IPO...

Why We've Been Bearish on the GoPro Stock Price

"GoPro makes some really cool products and they've got a rabid fan base of people who film themselves and others doing some truly outrageous things," Fitz-Gerald said last month. "But that doesn't mean they've got sustained profit potential. The company has engaged in deep, deep discounting this holiday season, and that's going to eat into margins."