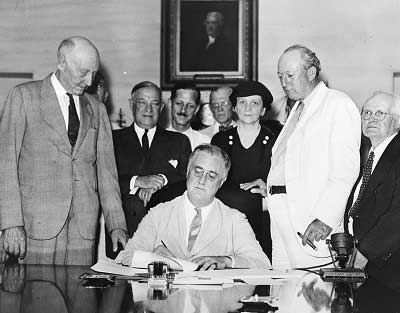 President Roosevelt issued several executive orders during his time of presidency at the height of WWII.

They offer the president an immediate way to advance his policies without the approval of the judicial and legislative branches. They embody – as one former White House aide, Paul Begala, put it to The New York Times in 1998 – "the stroke of the pen, the law of the land. Kind of cool."

But because of their powerful immediacy, executive orders are oftentimes more controversial than "cool." And what makes them rather contentious, as a whole, is the fact there is actually no specific mention of them in the U.S. Constitution. Instead, presidents have long assumed the power to issue executive orders is implied in Article II of the Constitution:

With that in mind, let's have a look at some of the most memorable of such presidential directives ever issued…

The Most Memorable in Our History of Executive Orders

The Average of 20 Presidents' Rate of EO Issuance Since 1900

Democrats have issued more executive orders per annum than the GOP since the year 1900. Republicans average 34 p.a., while Democrats have averaged 59. 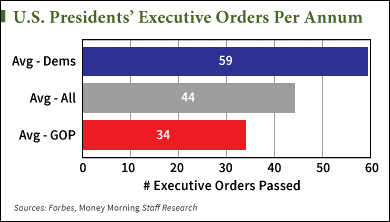 You see, there are directives known as "presidential memoranda" that effectively act just like executive orders. Combined with executive orders, the Obama administration's use of executive actions is rather unprecedented. Have a look…