For Jan. 15, 2016, here's the top stock market news and stocks to watch based on today's market moves… 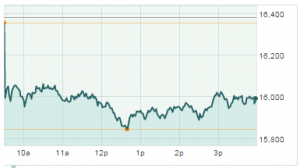 The Dow Jones Industrial Average today (Friday) fell 385 points to its lowest level since October 2014 as the global sell-off accelerated on the back of concerns about China's growing debt problems and a plunge in global oil prices. China's currency manipulation remains a major problem for the global markets, as we explain here.

On the economic front, it was another tough day for U.S. data. Here's a snapshot of the bad numbers today:

According to Money Morning Technical Trading Specialist D.R. Barton, the Dow Jones Industrial Average could test levels of 15,370. If the markets are heading in that direction, here's what you should do to prepare.