Editor's Note: Our Chief Investment Strategist Keith Fitz-Gerald wanted us to get this out to our Members today after the market sell-off. Trading starts again on Tuesday morning, so now is the perfect time to prepare for next week. Here's Keith…

Millions of investors are struggling to come to terms with yet another big down day and with good reason – stocks have now taken out August lows and this is the single worst start to a new year on record. More than $5.7 trillion has been wiped from the face of global markets so far, according to Bank of America Merrill Lynch.

There's a growing litany of headlines that would have you believe that it's game over, and that's not helping matters much.

Many investors are understandably tempted to head for the hills or stuff their money under the nearest mattress; you're not alone if you're one of them.

That's what we're going to talk about today and why you should be thinking about going on the offensive, even if there is more selling ahead.

I know this is easier said than done, but this is important stuff.

No investor has to suffer the ravages of a bull market if they're properly prepared and keep things in perspective.

Q – Why Is This Happening?

A – People are blaming China and low oil prices but, in reality, the blame lies squarely with the Fed. I know that people like to believe that the Fed has saved things and acted heroically throughout the global Financial Crisis, but that's simply not true.

The Financial Crisis has never really ended and the sell-off that's underway right now is simply an echo of decades of bad fiscal policy.

So while the selling began on concerns related to China and low oil prices as a function of slowing global growth, it's continuing as traders take money off the table to cope with the uncertainty of a ginormous gap between economic fundamentals and economic reality.

Q – How Much Longer Could the Selling Continue?

A – That's a function of leverage and risk.

Not many people realize this, but net investor debt reached levels mid-2015 that were roughly double those just prior to the dot-bomb crisis. That dropped a bit after QE stopped, but my point is that there's still a phenomenal amount of debt on the books.

You can see that quite clearly in this chart from Doug Short of Advisor Perspectives. 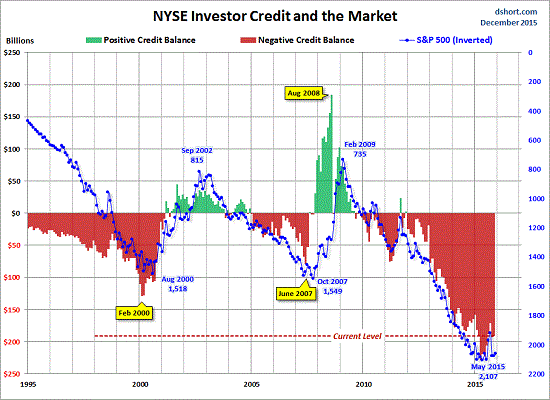 What you'll also notice is the near perfect relationship between the S&P 500 and those very same debt levels.

Does this mean the selling continues until the debt goes away?

No – debt is a function of growth. And, over time, the debt needed to sustain growth will naturally increase.

What matters now is that traders sell enough to bleed out the excess.

History shows very clearly that the sharper and more rapid the decline, the faster the markets heal themselves. So I'd almost argue for another hard down day or two to really put the weak money on the run and clear the pipes.

I know this is hard to understand and even harder to rationalize, given that running for the hills is a perfectly normal reaction at the moment. But, again, history is very clear on this.

First, there have been 29 times when the S&P 500 has dropped by more than 5% weekly since 1980. On average, the market moves higher 60% of the time during the following week and has closed up 5% over the next 12 weeks 71.4% of the time, according to Bespoke Investment Group.

Second, we've just lived through the longest bull-market expansion without a correction since WWII – what's happening now is as natural the sun coming up tomorrow. Markets go up and down. People simply forget that.

Both of those things are supported by sentiment readings that are reaching extremes across the board.

One of my favorites, the AAII Bulls and Bears Survey, is hovering at the lowest ratio in the survey's history. That's typically a very bullish contrarian indicator and one that has preceded an average gain of 7.7% in the S&P 500 six months after such readings, according to Jack Ablin, Chief Investment Officer of BMO Bank as reported by Time.

What's more, the last time the VIX – a key volatility indicator – rose above oil, it proved to be a fabulous time to buy stocks. 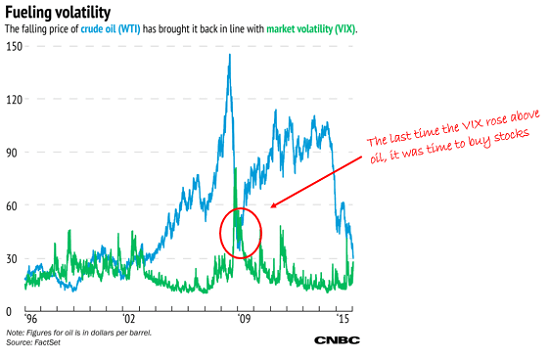 Friday's trading has taken us right to the edge… again.

Q – Why Is the Selling so Severe?

A – An estimated 68% to 75% of total stock market volume – a figure I find low, by the way – is now driven by algorithmic traders. Once the major averages broke through key support points, the computers kicked in and it became a free-for-all.

We're also headed into a three-day weekend at a time when the geopolitical situation stinks. Traders simply don't want to risk so they're selling.

Q – Is There Any Place to Hide?

A – Yes. There's always opportunity in chaos and current market conditions are no exception.

Focus on quality stocks selling products and services the world cannot live without. In tech, for example, that includes names like Facebook Inc. (Nasdaq: FB), Apple Inc. (Nasdaq: AAPL), and Alphabet Inc. (Nasdaq: GOOGL). Prioritize companies like The Coca-Cola Co. (NYSE: KO) that have a long history of increasing dividends through thick and thin. Put new money to work in companies like Raytheon Co. (NYSE: RTN).

Stocks like these are investments, not speculation. They may fall a bit with the broader markets, but the markets have a terrific upward bias over the long term. The Dow, for example, returned more than 22,000% over the last century despite two world wars, all sorts of regional conflicts, depression, recession, and more.

That means the most appropriate question you can be asking is not "Should I sell right now?" but "What do I do in the meantime?"

As long as you're investing money that you won't need to spend in the near term and keep risk management top of mind, you can weather a downturn.

It doesn't always feel nice, but it's how you win in the end.

Q – What Should Individual Investors Be Doing Now?

A – Exactly what we're doing here at Money Map Press and in all of our publications – not letting emotions get the better of us and sticking to a carefully disciplined approach that has been proven over time.

Don't lose sight of the fact that there are plenty of companies out there for which the business case is intact. What's happening now is a market movement, not an economic shift. There's a big distinction.

Most investors think that taking a loss is costly, but going to the sidelines and missing opportunity is always the more expensive proposition.

Do everything you can to stay in the game!

Q – I Panicked and Sold. Now What?

A – Hopefully, that was part of the trailing stops we cover together in our weekly alerts or regular articles. If so, you're in good shape.

If you let your emotions get in the way, that's not ideal, but not necessarily bad either.

Try adjusting your tactics and using dollar-cost averaging to get back in the game.

If you've never heard the term before, dollar-cost averaging is a Total Wealth tactic that helps you buy a specific amount of any investment on a regular basis.

What I like about dollar-cost averaging it that it helps keep risks low yet returns high, because it prevents you from investing a single large amount at the wrong time… like now, for example, if you're one of millions of investors worried prices could drop further.

I'm also a big fan of the discipline dollar-cost averaging instills because it takes emotion out of the equation.

And finally, dollar-cost averaging forces you to buy more shares when prices are low, while fewer shares are purchased when prices are high. Over time, your basis – a fancy way of saying your total cost – actually drops, and that, in turn, means you have that much more upside.

Had you dollar-cost averaged in for three months starting that same September, though, your holdings would be sitting on 581 shares worth $7,333 on the same day.

Both are losses and that's no fun. But here's where it gets interesting.

More to the point, 12 months later you'd be sitting on profits of 37.98% because of dollar-cost averaging versus barely breaking even had you invested all at once.

As of Jan. 6, you'd be sitting on profits of 496%, and your $10,000 would be worth at least $59,600 for having dollar-cost averaged into the Cupertino giant versus only 332% and $43,200 for having invested all at once following another major market swoon of epic proportions.

…even if stocks still have a ways to go before they find another bottom.

We're in this together and my team and I will be with you every step of the way.