Another SpaceX mission launched on Sunday, once again leaving investors to wonder when SpaceX stock will hit the market. 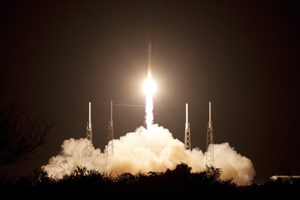 The SpaceX Falcon 9 rocket launched from California on Sunday to put a climate-monitoring satellite into orbit. The 22-story-tall rocket lifted off from Vandenberg Air Force Base on California's central coast at 10:42 a.m. PST (1:42 p.m. ET).

After successfully releasing the satellite into space, the Space Exploration Technologies Corp. booster traveled back to its intended floating ocean platform destination. But the rocket touched down too hard, broke one of its landing legs, and fell over.

This launch was particularly important for SpaceX because the rocket was attempting to land on a ship.

SpaceX founder, chief executive, and designer Elon Musk wrote on Twitter that it is "definitely harder to land on a ship." He compared the difference between aiming for "an aircraft carrier vs. land." SpaceX company officials likened such an accomplishment to "trying to balance a rubber broomstick on your head in a windstorm."

Still, SpaceX's launch Sunday was deemed a success and has investors clamoring for SpaceX stock…

A successful ocean landing would have been another milestone for SpaceX. Last month, it achieved a spaceflight first with a successful ground landing in Florida. That landing marked a key step in Musk's quest of developing a cheap, reusable rocket.

Being able to land at sea would also give the company flexibility. At-sea landings would allow SpaceX to recover rockets used on more challenging missions, such as launching heavy satellites, when boosters don't have enough fuel left to reach land.

The company's two prior ocean-landing attempts in 2015 were also unsuccessful, thwarted by mechanical and fuel issues. A third scheduled attempt last year was aborted due to bad weather.

The Falcon 9 launched successfully six times in 2015. However, company officials say they need to at least double that annual rate to keep pace with backlog. Preliminary launch schedules show two more launches in the next couple of months.

Musk said it might take several years for SpaceX to establish procedures and timetables for testing and then relaunching used rockets.

In the meantime, investors will continue to clamor for a SpaceX IPO and a chance to invest in SpaceX stock…

Will an IPO Bring SpaceX Stock to the Market in 2016?

SpaceX was founded in 2002 by Elon Musk, best known as CEO of Tesla Motors Inc. (Nasdaq: TSLA). Its mission was to reduce launch and transportation costs, and to ultimately enable the colonization of other planets.

SpaceX first gained recognition in 2011 when NASA awarded the company $75 million to develop a revolutionary launch escape system that will enable the company's Dragon spacecraft to carry astronauts.

Earlier this month, SpaceX was one of three companies awarded NASA contracts valued at several billion dollars for commercial cargo deliveries to the International Space Station through 2024. SpaceX's cargo missions to and from the ISS will start in late 2019.

The quarterly impulses of fickle investors could be damaging to SpaceX's long-term goals. Since SpaceX's inconsistent long-range goals wouldn't be "super loved by the markets," it doesn't make sense to take the Hawthorne, Calif.-based company public.

"It [SpaceX] will go public once we have regular flights to Mars," Musk told investors.

The Mars Colonial Transporter is part of Musk's spaceflight system that will shuttle humans to and from Mars. In 2011, Musk said he hopes to be able to do this "within 10 to 20 years." So despite the demand, it looks like we are still years away from investing in SpaceX stock.

Hopefully Elon will be able to keep SpaceX out of the public markets as he has bigger fish to fry than quarterly earnings statements.
Shareholders in public companies have little or no imagination when it comes to "Big ideas".
Elon has plans for SpaceX that hopefully will never need him having to take the company public. Maybe a liquidity event to some of his current shareholders as long as he maintains the majority vote.
I'm hoping that he takes a leaf out of Richard Branson's book. When Branson realized that he had made a huge mistake by taking Virgin public, he bought all of the shares back and took it private again…smart if you want to do bigger things than just pander to those quarterly's.