Just because battered U.S. stocks got an extra day of rest over the three-day weekend doesn't mean they're going to be ready to suddenly get up and fight their way higher.

Sure, they could get to their feet and even dance a little. But they're more likely going to get pounded again and again and, more than just possibly, get knocked out cold.

So I'm going to show you why we could bounce - and how to tell if that's just a head-fake.

And then I'm going to show you why more chaos is coming, and how to protect yourself.

This Is a Worldwide Stock Beatdown

How Shah Predicted This Sell-Off 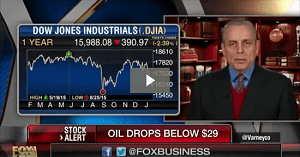 Shah Gilani joined Fox Business' "Varney & Co." Monday morning where he updated viewers on why his 20% stock market correction prediction - which he said on air in August 2015 - is coming true in 2016. Watch the video here.

First of all, it isn't just U.S. stocks that have been clobbered lately - and by lately, I don't mean since the beginning of 2016.

Rather, U.S. stocks began to weaken considerably in August. Markets, as measured by the major indexes (the Dow Jones Industrial Average, the S&P 500, and the Nasdaq Composite), fell 10% in a matter of weeks back then.

They appeared to recover quickly and began to rise through the fall, and looked like they were headed back toward record highs through December.

While the FANG headliners', all of which are big-capitalization stocks, positive percentage moves were taking indexes higher, underneath the spotlight the rest of the market continued to weaken.

But, like I said, it isn't just stock markets in the United States that are weak.

It's Even Worse in the BRICs and Europe

Emerging markets are getting pounded. Brazil is trading at multiyear lows. European stocks are slipping. Russian stocks can't hold short-term gains, and China's blue-chip stock market, which imploded 30% from its highs last August and bounced back with government intervention, is back at its August lows.

Even more dangerous is that correlation - the tendency for different asset classes across global markets to move in unison - has increased dramatically.

When the weight of so many correlated assets, across so many countries, sinks so many markets and mayhem ensues (as it has), more is likely coming.

Some Spot "Rallies" Could Prove Dangerous - Here's What to Do Instead

As oversold as markets in the United States are, and many globally, and as oversold as oil appears, as well as commodities and lots of currencies, prospects for spot rallies increase everywhere.

We could see rallies. A lot of assets look like they're at compelling "value" levels given where they were not long ago and how far they've fallen in so short a time.

But for rallying markets or asset classes to be able to sustain any more upside than short-covering spikes higher to new resistance levels, which were support levels only a few weeks or months ago, would be highly unlikely.

The weight of global markets on one another means that near-term bounces will be nothing more than dangerous head-fakes, unless oil, Chinese stocks, emerging markets, and industrial commodities can rally above overhead resistance and establish those levels as new support.

And the chance of that happening is exactly between slim and none.

That's why we can expect more market mayhem.

In my trading services, Short-Side Fortunes and Capital Wave Forecast, we've closed some long positions and established a host of short positions to profit from these downtrending markets across so many asset classes. If you haven't done that, then, at minimum, put down stop-loss orders to get to the sidelines if more mayhem rolls in this week or next week.

As far as this maybe being the bottom of this downdraft, if it is we'll cheer markets higher, cover our shorts, and jump back in.

But then again, when I see a train coming at me, I jump out of the way rather than try and jump on it.

Shah is following a simmering bond crisis in Europe. Once it boils over, it may take just hours for the contagion to spread to U.S. markets, where the fallout will make the Crisis of 2008 seem mild by comparison. Click here for his latest report about how to avoid the carnage and, even better, make money on it once the market turns over. You'll also get his twice weekly Insights & Indictments. There's never a charge for Members.