Over the past few days, I've read at least 10,000 words of analysis from various market "experts" attempting to explain the market sell-off.

But when you boil down what's going on to its most basic elements, you really only need to know two words to understand this market correction.

At first, these two words may seem disconnected. However, today I'll show you how they're two sides of the same financial coin - and they put what's happening with the economy and the markets into perspective.

Understanding the market's plunge may sound little more than academic at this point. Who cares why something happened? What you want to know is what to do now.

Well, you can't go on the offensive - you can't make the right moves - without first understanding the sell-off. 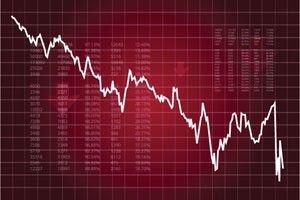 Wall Street seems to have come unhinged this month. And it all comes down to our first word - uncertainty.

Uncertainty is the one thing that institutional investors hate above all else.

This explains why so many pros have been selling aggressively over the last two weeks. It's also the key reason why stocks go down much faster than they go up.

When Wall Street is uncertain about how key factors will play out, it quickly becomes a scenario of dump stocks first and figure it all out later.

Let's start with the price of oil. When it dropped below $30 a barrel last week, we saw a wave of selling on heavy volume.

That $30 price tag seems to be a key psychological threshold for traders. The worry here is that if prices fall much further, it could destabilize not just the U.S. energy industry, but also spread deflation through emerging economies that rely on sales of commodities to raise currency.

While I don't see that causing a global recession, Wall Street is pricing securities to get in front of that signature event should it occur.

The other major piece of uncertainty comes from China. Central bankers there earlier this month decided to drive down the price of the yuan to stimulate more exports. That caused a big sell-off in Chinese stocks... and that spread to the U.S. markets.

Not only that, but investors are discounting stocks now out of fear that China's economy may have grown less than the expected 6.8% in 2015. China is the world's second-largest economy, so a slowdown there could affect global growth.

That brings us to the second word that helps make sense of this all...

Leverage is vitally important - and the key reason why we're not on the verge of a 2008-style financial crisis.

Back then, the United States was leveraged to the hilt. Big banks and Wall Street had engaged in a pattern of trading exotic financial instruments based on a frothy real estate market.

It worked like this: People who didn't qualify for mortgages - and had no money to put down - were able to buy homes en masse using subprime loans.

Then the banks took those loans, sliced them and diced them, and traded them as collateralized debt obligations (CDOs). In other words, banks were trading pieces of paper that were so leveraged they had basically zero value in a housing downturn.

Once the real estate market cooled and we saw an increase in defaults, the whole house of cards collapsed. I don't see a repeat of that as a danger right now.

Here's why. Household debt measured at the end of 2007 comprised 130% of income, U.S. Federal Reserve data show. That number had fallen to roughly 103% as of last year's third quarter. It's still higher than I'd like - but clearly manageable.

Meanwhile, banks today are much healthier. Consider that the 31 major financial institutions in the Fed's latest "stress test" have $1.1 trillion in common equity capital. That's more than double the $459 billion they held at the end of 2008.

Also, don't forget that overall the economy is doing well. Unemployment is at 5%, and gross domestic product (GDP) is growing by more than 2.2% a year.

We just finished the biggest year ever in the history of auto sales, moving more than 17.4 million new cars and light-duty trucks.

So, while we may see some more selling in the days ahead, remember that we're in the midst of a sound economy that doesn't seem prepared for an immediate recession - let alone another financial crisis.

At Strategic Tech Investor, you've been quietly getting ready to take advantage of this turn of events.

First, you make "cowboy split" entries, in which we put in a lowball limit order to buy more shares of winning tech firms at a discount. This helps us avoid getting stopped out as we add to our long-term earnings.

Second, you play "moneyball" - taking gains off the table along the way to protect your profits from market retreats.

So, while the value of your portfolio may have declined in the last two weeks along with the markets, you should be in overall good shape.

And what to do next?

There are still many quality companies (and stocks) out there. And I'll be right here with you - bringing you winning tech leaders that you can now buy at a discount...

And improve your profits over the long haul.

Go "Open Source" to Grab Big Gains: Open-source platforms are a great - and completely free - way to improve your investing strategy. These three open-source tools in particular will hone your skills, raising your odds of crushing the market not just this year, but for many years to come...