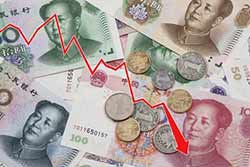 On Wednesday, the Dow Jones Industrial Average cratered another 249 points as crude oil prices slumped to lows not seen in more than 13 years and concerns about global economic growth weighed on investor sentiment. Earlier in the day, the Dow Jones fell as much as 566 points on weakening earnings reports. The CBOE Volatility Index (VIX) - Wall Street's fear gauge - jumped 6% on the day.