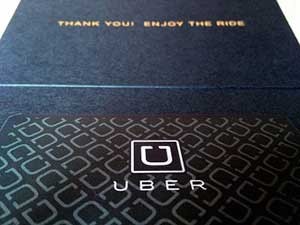 Now she's taking on one of the brightest stars in the sharing economy – Uber. And her intention is to upend Uber's business model.

If Liss-Riordan succeeds, it could cost the ride-sharing company $4.1 billion.

The End of Uber's Business Model?

Uber's been a smash hit in one of the hottest tech trends of 2016, the "sharing economy" – a person-to-person-based sharing of access to goods and services. Uber functions as a ride-sharing company. In other words, it connects people in need of road transportation to drivers via a mobile app the company developed.

A key to the company's business model is its classification of drivers as "independent contractors" rather than employees. That means Uber doesn't have to pay out Social Security or Medicare for its drivers. It also means the drivers are responsible for almost all of their own business expenses, including car repairs, gas, mileage, etc.

Shannon Liss-Riordan, however, argues such a designation is a "misclassification."

In the official court document filed March 11, 2015, with a San Francisco federal court, Liss-Riordan outlines the misclassification as grounds for a class-action lawsuit. Because the company dictates certain working conditions, such as the cost of the fare, it conducts itself more like an "employer," according to the lawyer.

Shannon Liss-Riordan explains “worker misclassification” lawsuits against on-demand companies such as Uber.
Thus far, courts have sided with Liss-Riordan. In the March 2015 case, Judge Edward Chen denied Uber's motion for summary judgment. He ruled that it should be heard in front of a jury. Then, on Nov. 20, a U.S. appeals court denied Uber's argument that class-action certification should not have been granted.

Now the case is headed to jury trial slated for June 20, 2016, in San Francisco.

Uber stands to lose a lot if Liss-Riordan wins.

To the tune of $4.1 billion annually…

Fortune crunched the numbers in September by accessing leaked Uber financials. These clandestine documents put the company's expected sales per year at about $10 billion. 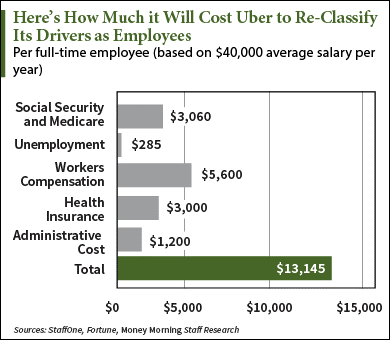 Fortune considered the added costs should Uber be responsible for its workers as employees. Based on a $40,000 average driver salary per year, Fortune found that it would cost Uber an extra:

At approximately 200,000 drivers (a figure Fortune gleaned from third-party app SherpaShare), here's a breakdown of how much Uber's costs would rise should Liss-Riodan win the historic case:

At a $51 billion valuation, Uber's not going to go belly-up if it loses. And the loss in California, writes Fortune, would not automatically mean the ride-sharing company has to change the status of all of its drivers — though it will add to the pressure to do so.

But that will just begin the chipping away of Uber's business model. On Jan. 6, Liss-Riordan launched a fresh attack, seeking employee protection for dozens of drivers who won't be included in her massive class-action lawsuit because they drove through intermediary limo companies or used corporate names.