Gold prices were slightly lower today (Thursday) as markets calmed, but we still see gold prices soaring in 2016. In fact, investing in gold is one of the smartest decisions investors can make during this extreme market volatility.

But first, here's what caused gold prices to dip today… 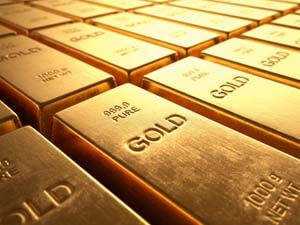 In early morning trading, spot gold prices were down $3.50, or 0.32%, at $1,098.70. There is still plenty of risk aversion in global markets, so traders don't expect precious metal selling to continue.

While the stabilizing markets sent the price of gold down today, any additional easy money measures from the ECB are very bullish for gold prices in 2016.

Wednesday, gold prices surged $17.20, or 1.58%, to settle at $1,107.10 an ounce. It was the gold price's biggest gain in two weeks and highest close since Jan. 7. Escalating fears of a global slowdown and an unrelenting slide in oil prices had investors piling into gold.

Global financial market turmoil this year has rekindled interest in gold, which is a very popular safe-haven investment.

The chaos in global markets is also expected to prompt the U.S. Federal Reserve to pause on its interest rate tightening path. That's bullish for gold.

And a string of recent economic reports showing that U.S. economic growth is sputtering is another catalyst for gold prices.

"Weak or falling productivity is traditionally gold-friendly," HSBC said in a note to investors Wednesday. "Although prices may pull back near term, we look for the gold rally to continue above $1,100/oz."

"Millions of investors are looking for the exits and a reliable safe haven," Money Morning Resource Specialist Peter Krauth said. "And with Middle East tensions flaring and perpetual uncertainty over Chinese markets, millions more are sure to follow. But… all that bad news on the markets is terrific news for gold – and everyone holding it."

Gold Prices Will Be Fueled by These 3 Catalysts in 2016

Krauth said the big theme this year will be volatility in just about every market.

Gold Prices Driver No. 1: Mine Supply

The Thomson Reuters' GFMS group says that while global gold output has risen every year since 2008, that won't be the case this year.

William Tankard, head of research for precious metals mining, expects output to fall from 3,150 metric tons in 2015 to 3,050 metric tons this year.

Tankard commented, "This is in large part likely to be driven by the relative lack of development going into the industry over a three-plus-year period." He went on to explain that producers have been "high-grading" their production for several years thanks to weaker prices. But that option has now largely run its course, meaning lower-grade ores will produce less gold.

Gold Prices Driver No. 2: The Cost of Money

The Fed lifted interest rates on Dec. 16, and that was the first hike since June 2006.

But the increase was a slight 0.25%. While policy makers project further increases this year, additional moves will be "data dependent." Krauth thinks persistent weakness will make it too difficult for the central bank to follow through.

Additionally, Krauth says that while inflation could start to finally take hold this year, deflationary forces are still going to work against that to keep any increase relatively weak.

That means real interest rates will stay low, and the opportunity cost of owning gold will continue to support its ownership and attractiveness versus other asset classes like stocks.

Krauth says the third main driver for higher gold prices in 2016 will be demand. While mining output is likely to decline, low gold prices will continue to attract buyers, especially in Asia.

India eclipsed China as the biggest overall buyer of gold last year, with a total import level likely to reach a whopping 1,000 metric tons, up from 900 metric tons the previous year.

Further, as investors start looking to diversify from challenging stocks, Krauth expects record sales set at various mints around the world to continue into 2016. Low gold prices helped push U.S. Mint sales to a record level in 2015, with gold coin sales rising by an astounding 53% over 2014.