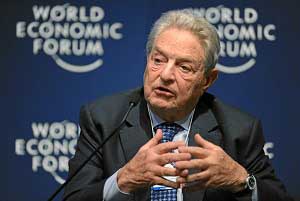 Speaking to Bloomberg TV at the World Economic Forum in Davos, Switzerland, Soros said a hard landing for China's economy is practically unavoidable. "I'm not expecting it," he said. "I'm observing it."

The former hedge fund manager-turned-philanthropist went on to compare the current global deflationary environment to the 2008 subprime crisis in America eight years ago...

We're repeating it, he warned.

This time, however, Soros blames China's over-indebtedness as the primary factor responsible for global volatility. "The Chinese left it too long to address the changeover in the growth model that they have to adopt from -- investment and export-led to domestic-led."

The veteran investor also noted that China already has a manageable solution in its $3 trillion worth of foreign exchange reserves. Regardless of that fact, its problems are being passed on to the rest of the world.

And while the Chinese economy is a major contributor to global volatility right now, Soros added that it's not the only factor roiling markets up. "You've got basically three major root causes. One is China, the other is oil and raw material prices, and the third is competitive devaluation. You have all three."

Competitive devaluation is something Soros knows well. The Hungarian-born hedge fund manager "broke the Bank of England" in 1992 when he made a quick billion betting the UK would be forced to devalue the pound.

Soros also predicted the unfolding of the Asian financial crisis in the late '90s. And in 2008, he issued a warning of what he referred to as a "superbubble" in the American mortgage market.

Yesterday Soros revealed that he is short the S&P 500 and long TSYs before noting that now is not the time to buy.

When asked on his outlook for future global growth, Soros said that although he "sees the light at the end of the tunnel," he "just doesn't know how to get there."

I enjoy your stories