Editor's Note: We're sharing this Oil & Energy Investor with you today because Kent is recommending the single best investment to profit from Russia's growing energy crisis. It's up more than 60% this month alone, with plenty of upside left, so Kent believes it's essential our Members know how to use this investment correctly...

The Russian financial situation is heading south again - and fast.

Crude oil prices of less than $30 a barrel are bad enough, but Russia can't even fetch that. The country's "sour" high-sulfur export blend, Urals Export Blend Crude (UEBC), is trading at $26 a barrel - or less. Natural gas is faring even worse.

The fact is, Russia is dependent on oil and natural gas exports to buoy its unwieldy central budget. So the world's largest country is in trouble, and serious trouble if it can't find a way out.

There is a way out, though there's only one option, and it's far from certain whether Putin can make it happen.

What is certain is that there's a juicy profit opportunity for us. Let me show you...

Before you make the investment I'm about to show you, it's very helpful if you understand the unvarnished truth about Russia's energy-dependent economy. 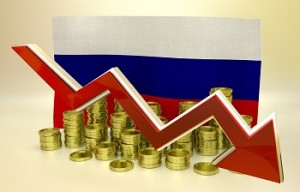 Natural gas is now so cheap that Gazprom PAO (OTCMKTS ADR: OGZPY), Russia's state-controlled - and the world's largest - gas behemoth, is barely recouping extraction costs. The value of Gazprom depository receipts traded in London and New York are down 36% and 49%, respectively, in barely a year.

The price of exported gas is adjusted, based upon a basket of crude oil and oil product prices. Both have gone down, dragging with them the revenue realized from selling gas abroad.

In addition, competition from elsewhere - especially North African and other shipments of liquefied natural gas (LNG) - are reducing reliance on Gazprom's long-term, "take-or-pay" contracts. Take-or-pay requires the buyer to import a set amount per month - or pay as if they had.

That's bad for Russia, but it's about to get even worse. That competition will increase as American LNG exports are phased in.

Even Gazprom acknowledges that the United States will account for at least 6% of the world's LNG market by 2020, up from 0% today. That merely accentuates the Russian export quandary. The much ballyhooed agreement for Gazprom to export gas to China will not result in a net addition of sold volume anytime soon.

Now, the price of this gas has not been disclosed publically. But you can be sure that Beijing will be pushing for a lower price than what Russia currently charges Western Europe.

And my sources attest to the lower than expected proceeds moving to Moscow.

As an example, the central portions of the country - including Moscow and the primary population centers of European Russia - are currently (and unsurprisingly) experiencing brutal cold and snowfall. Over the past few days, that has extended into Asia, to Russia's Pacific coast around Vladivostok.

As you would expect, domestic natural gas usage is approaching all-time highs.

Yet Gazprom is losing money because government regulations prevent it from setting a market price for gas that reflects this demand.

The price of gas in Russia is supposed to be undergoing a phased move to market levels. Alas, intensifying economic problems have obliged the Kremlin to delay implementation of this plan.

Which brings us to the main crisis now underway in Russia...

The Ruble Is Crashing...

The Russian currency, the ruble, is rapidly losing ground, with the currency down to almost ₽82 to the U.S. dollar - and over ₽89 to the euro - in midweek trading.

The situation has deteriorated drastically over the past year, as the ruble has descended from an average of ₽32 to the U.S. dollar. It has made imports virtually impossible to afford and created shortcomings all up and down the trading curve.

That spells havoc for the Russian economy. 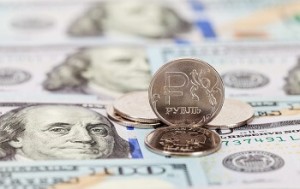 As a matter of course, the Russian Central Bank (RCB) would use substantial hard currency reserves to prop up the ruble by buying the currency. That is now becoming unsustainable, because these reserves themselves depend on oil and gas exports.

The low prices Russia has realized have deeply cut the RCB's ability to prop up the ruble against a continued onslaught on the currency's value.

Here's the problem in a nutshell...

Every time a central bank intervenes to artificially set the value of a local currency, traders on the other side see an opportunity to press the matter.

This does two things:

The last time there was a steep drop in the value of the ruble (down to the low 60s to the dollar, or a third less than the current level), the RCB's actions included requiring exporters to exchange hard currency proceeds at an abnormally low exchange rate and restricting access to dollars and euros.

Both measures had an immediate negative impact on Russian oil companies - the first cut deeply into revenue; the second made the next exports even more expensive because the trade in oil is denominated in dollars, not rubles.

By restricting access to foreign currency, the RCB has just made the sale of oil abroad even less profitable for Russian companies.

The result has been a chilling effect on the entire Russian economy - one that's got nothing to do with Russia's notorious winter weather.

There is an easy way to gauge this result by using one thumbnail indicator - the Direxion Daily Russia Bear 3x ETF (NYSE Arca: RUSS).

It also happens to be the single best, easiest way to make money on Russia's profound and deepening economic problems.

As the name implies, this exchange-traded fund rises three times faster than the Russian market falls. It was up 14% though noon Wednesday alone, more than 26% for the week, and nearly 60% for the month.

Now, this could bring big profits very quickly, but it must be used very carefully - if the Russian market recovers, the leveraged Daily Russia Bear fund will decline three times faster than the recovery.

As for a way out of this mess, it is, as I've said before, the introduction of oil production limits. That is the most direct way of increasing prices and lowering the drain on the ruble.

Unfortunately, that would require coordination between the world's major oil producers, but Saudi Arabia has yet to show a willingness to seriously consider bringing this about.

hello
which brings us to the real issue, which is…?

So I look at RUSS as a possible investment and it drops over $12 since the close yesterday. What should I think now?

Dr. Kent, all thats great news but why is it that after the BIG environment conference a few weeks ago no one talking about Uranium. The Obama administration and all the other head's of government are talking about solar and wind power is there some kind of conspiracy at work here, what's your take on this?.