In the 2008 recession, roughly half of Yahoo stock's value was wiped out in less than a year. 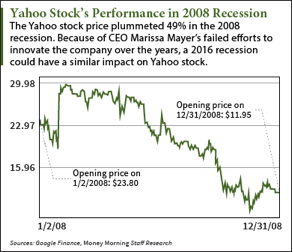 Along with the financial crisis of 2008, Yahoo was suffering an internal crisis.

Microsoft Corp. (Nasdaq: MSFT) tried to acquire Yahoo for $44.6 billion in stock and cash in February 2008, but the company refused the offer. The two companies continued talks, but Yahoo announced in June 2008 that it would not sell its search engine business or company as a whole to Microsoft.

Yahoo appeared to have missed a major opportunity...

After Yahoo had rejected Microsoft's offer at the start of the year, which amounted to $33 per share, the Yahoo stock price traded at a 52-week low of $8.94 on Nov. 20.

This led to CEO Jerry Lang stepping down. Then, over 2,000 employees were fired in the process as cost-saving measures.

Now in 2016, Yahoo is still struggling with the same issue of staying relevant in the technology sector. And once again, this could cause its CEO to step down.

Investors fear a similar YHOO stock drop could be coming during this year's bear market.

CEO Marissa Mayer's questionable decision-making process has caused Yahoo stock to fall 23.42% in the last six months. Yahoo stock fell 34.6% in 2015, even as the Nasdaq climbed 4.2%.

Under Mayer, Yahoo's revenue has decreased 7.3% year over year since 2012. She has a history of buying companies from her former employer, Alphabet, that are internally considered to be bad ideas, according to investment group manager Eric Jackson.

Mayer's most recent failure was announced in early January. The company decided to shut down its video content service Yahoo Screen, but not before investing $100 million into it over the past two years.

Now activists are placing pressure on Yahoo's board to find a new leader.

Current investor frustration with Yahoo stock, plus the company's falling revenue, means a bear market in 2016 could be even more damaging to Yahoo stock than the 2008 bear market.

It does have options - but neither of them look extremely promising...

The Only Hope for a Yahoo Stock Turnaround

Yahoo is at a crossroads: The company can either spin off its shares of Alibaba Group Holding Ltd. (NYSE: BABA) or sell its Internet business.

But the timing is very unfortunate for the company, as it coincides with a major market sell-off.

Yahoo originally believed that it could spin off its shares of BABA tax-free, but the Internal Revenue Service did not guarantee a tax-free spin-off in September 2015. Despite the uncertainty, Yahoo General Counsel Ron Bell stated that the company would still consider its options in a spin-off.

The company's only other option is to sell its Internet business, but Mayer would struggle to find a buyer.

And aside from Yahoo's failures in generating mobile revenue and in Yahoo Screen, Mayer struck out with her "Snapchat- and Instagram-killer" app, Livetext.

Lagging behind competitors appears to be in Yahoo's DNA. Yahoo has failed at being a leader in search, video content, and apps. Yahoo could have unlocked shareholder value if it accepted Microsoft's original offer in 2008, but the company passing on the deal left shareholders with a 72% loss by the end of November. Now Yahoo might not even receive any interest for its Internet business.

The Yahoo stock price was already volatile before the 2016 bear market hit. And if Mayer couldn't unlock shareholder value in a bull market, it'll be even harder for her to do it now.

The Bottom Line: Yahoo stock plummeted in the 2008 recession, and things could get much worse in a 2016 bear market. CEO Marissa Mayer's lack of innovation has caused the stock to drop 23.42% in the last six months, and she doesn't have a clear plan to turn the company around.