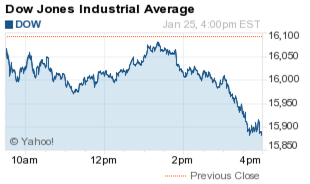 The Dow Jones Industrial Average fell 208 points today (Monday) as oil prices continued to weigh on the global economy and a slate of mixed earnings reports left traders with a mixed feeling about corporate profitability. Shares of McDonald's Corp. (NYSE: MCD) hit an all-time intraday high and offered the strongest boost to the Dow Jones after the company reported strong quarterly earnings and a 5% hike in same-store sales. Meanwhile, shares of Halliburton Co. (NYSE: HAL) were the biggest drag as the oil field service giant suffered a weak quarterly report due to falling profitability in the North American energy sector.

On the economic front, the business activity in Texas continues to worsen. The general business activity index from the Dallas Federal Reserve for January hit a six-year low. The official reading was -34.6 - far below economists' expectations. A far-reaching slowdown in industrial production complemented an already worsening situation in the energy sector, a core driver of growth in the Fed district. Following the announcement, markets are increasingly focused tomorrow when the Fed Open Market Committee kicks off its first meeting on monetary policy of the year. Following last month's meeting, during which the central bank raised interest rates for the first time since 2006, investors do not anticipate that Janet Yellen and company will make any changes to policy.

Money Morning Members: Keep reading for more on why the Dow Jones Industrial Average plunged more than 200 points today. For those new to Money Morning, sign up to keep reading - it's completely free...