I’ve been driving my new 2016 Acura MDX – the most “connected” car I’ve owned yet – for well over a month now.

And my family and I still love it – this beauty drives like a dream.

This car is loaded with proto-self-driving technologies – known as advanced driver assistance systems (ADAS) – like lane-keeping assistance and adaptive cruise control. And that’s not even getting into its voice-guided navigation and souped-up dashboard infotainment system. 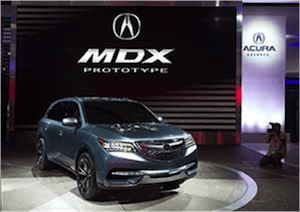 The 2016 Acura MDX is loaded with "connected" car features, such as ADAS and tech-driven infotainment and dashboard systems.

That’s not to say the car is perfect – and reader Alex S. wrote in to let me know all about it. Alex says he owns a year-older MDX that has one annoying tech “feature”…

“The voice recognition is abysmal, the worst I have ever used,” he writes. “My cellphone has far superior recognition and GPS map guidance.”

He makes a great point – the car’s operating system still needs a great deal of work to reach “perfection” – and it’s one that cuts to the heart of a huge disconnect for advanced auto tech.

Automakers are still largely reinventing the wheel when it comes to adding today’s most advanced technologies to new vehicles.

Those carmakers sold a record 17.5 million vehicles last year. But their success could be in jeopardy if they drop the ball on the operating system they adopt.

Luckily, two iconic tech stocks are riding to their rescue…

Like Alex and I have pointed out, the overall operating system on my MDX – and I bet a lot of other new connected cars – needs an upgrade… and fast.

Push one button on the steering wheel and you reach the Acura “voicebot.” But she needs several prompts to get an address loaded or to find a specific location.

By contrast, if I hold the voice-activation button a second longer, I automatically connect to Siri, the artificial intelligence-driven voicebot in my iPhone 6s.

I can ask Siri a simple question, like “give me directions to Horatio’s restaurant in San Leandro,” and I’ll get a quick answer. “Ms. Acura,” on the other hand, has no idea what I’m talking about.

Siri will give the answer and display it on the phone. But Acura will only display its own proprietary system.

With embedded tech features as a major sales lure, the auto industry is coming off a historic year in 2015 in which it sold just shy of 17.5 million new cars and trucks.

That’s why there’s a lot riding on getting what I’m calling “automotive operating systems” (AOS) right.

The researchers at IHS say the sector behind in-dash infotainment systems – the point where drivers interact with the AOS – is worth more than $31 billion.

Today, many automakers still develop their own in-house AOS. But that’s changing quickly.

In fact, I think 2016 will mark the tipping point in which Silicon Valley operating systems will supplant those from the auto industry itself.

And if we can find the tech companies who will develop and market the most successful automotive operating systems, we can also follow that money.

IHS says the two AOS developers we’re focusing on today now guide about 1.5 million cars. But by 2020, that figure could rise to 68 million.

To understand why so many drivers are frustrated with the auto industry’s in-house approach, you have to go back to June 2011.

That’s when J.D. Power’s annual Initial Quality Study of automakers – which measures problems experienced within the first 90 days of auto ownership – found that Ford Motor Co. (NYSE: F) had dropped to 23rd place… from fifth place the year before.

Consumers weren’t complaining about how often Ford cars had to be repaired or their drivability. Instead, they were livid about the company’s MyTouch dashboard system, which had a lousy interface and was riddled with bugs.

J.D. Power found that 43% of all connected-car owners fail to use their voicebots for navigation or concierge service.

Another 38% never take advantage of their cars’ ability to use a wireless link to create an Internet hot spot, while 32% ignored the software apps embedded in their infotainment system, such as Yelp and Pandora.

Road & Track magazine is a big fan of Cadillac’s new CTS Sedans – with one notable complaint. “I occasionally wanted to punch a hole through the CUE touchscreen, but this is nothing new. CUE basically ruins the CTS – as it does to every other car it’s in,” auto critic Jason Cammisa wrote.

But in 2016, consumers are on the road to avoiding these kinds of headaches.

We have a pair of tech giants to thank for that. They have already revolutionized smartphone interfaces.

Let’s start with the AOS design team at Apple Inc. (Nasdaq: AAPL). For half a decade, they’ve been working on Apple CarPlay, which has started to filter into the marketplace recently.

CarPlay is a perfect example of how Silicon Valley will soon crush the auto industry’s own anemic software.

Plugging an iPhone into a dashboard jack brings up the Apple interface and displays it on the car’s touchscreen system. You can make calls, send and receive messages, and listen to music – all while keeping your eyes on the road.

You won’t ever need to look at your dashboard again. Apple’s Siri will simply talk to you about what you want to do, from changing the temperature to hearing a text message read aloud.

Of course, you could do a lot of those things (though perhaps not as intuitively) with the legacy touchscreen systems. But Apple’s system goes further.

It gives you access to all the information stored on your iPhone, including your contacts, music playlists, previous map searches, and calendar.

CarPlay is so much better than the so-called OEM (original equipment manufacturer) touchscreen systems that many automakers cast their lot with Apple.

More than 30 vehicles will have CarPlay this year, including a number of models from Chevrolet and Volkswagen.

And here’s where it gets interesting.

Alphabet Inc. (Nasdaq: GOOGL) – Google – is pursuing the exact same path. Its Android Auto interface will be very familiar to anyone who uses an Android phone.

In 2016, Buick, Cadillac, Volvo, and others will all offer an Android Auto option. By the end of this year, it’s slated to be in more than 30 models. Like CarPlay, Android Auto gets rave reviews.

Alex Davies at Wired put Android Auto through a broad range of tests – and found that “it handled them so much more easily than any automaker-provided system I’ve tested. It is remarkable for its simplicity and flexibility. It’s easy to use. It works.”

Android Auto is also scoring high marks for its large buttons and intuitive GPS mapping that looks for destination clues in your phone’s history.

Of course, these Silicon Valley leaders would like to have the AOS market all to themselves. But some automakers still intend to continue developing their own systems.

Here’s how I think it will all shake out. Consumers will bypass native auto operating systems in cars that use them – and instead rely on Apple CarPlay and Android Auto through their smartphones.

In other words, these two tech titans will own this market by the end of this decade – thanks to consumers’ own choices.

And both Apple and Alphabet (Google) continue to be excellent long-term investments – just the kinds of companies you can depend on to get you through rocky patches such as the one we’ve been seeing over the past month.

With their tentacles extended into everything from the smartphones in our pockets to the vehicles in our garages, they’re the perfect way to stay “connected” with the “convergence economy.”

Understanding the Stock Market Sell-Off: When you strip it down to its bare bones, there are really only two words you need to understand this market sell-off. They put what’s happening into perspective – and they're vital to planning your next move…