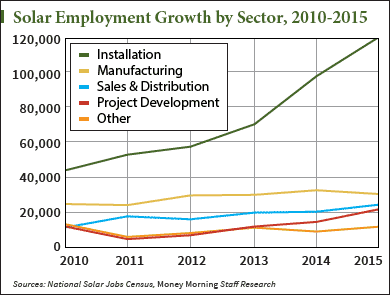 The solar job market is booming.

In sharp contrast to the oil industry's 17,000 job cuts in 2015, the solar energy industry added 35,000 jobs last year. That's a 20% uptick from the previous year, according to a Jan. 12 report released by The Solar Foundation's National Solar Jobs Census.

That growth is expected to continue into 2016, the census revealed. Another 30,000 solar industry jobs are expected to be added within the next 12 months.

Which is clear evidence of one undeniable factor...

Solar energy is about to become the number one source of energy on the planet.

As growth in the solar market continues, opportunities for investors are surfacing...

Solar Energy Is Growing Tenfold Thanks to Incentives, Demand, and Support

Last year, the clean energy industry attracted a record $329 billion in investments - nearly six times the total in 2004, according to a Jan. 14 report by Bloomberg New Energy Finance.

So while oil and gas prices were well into their slow descent in 2015, clean energy was actually thriving.

Particularly solar, as evidenced by its flourishing job market.

Here's why this one particular segment of the clean energy market is doing - and is expected to keep doing - so well:

Get ahead of solar's payoff - we have the perfect "in" on one tiny company at the center of it all. It stands to deliver early investors 10, 15, 25, even 50 times their money...