For Jan. 26, 2016, here's the top stock market news and stocks to watch based on today's market moves… 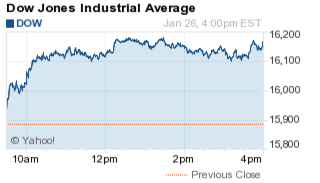 On the economic front, the Fed Open Market Committee kicked off its first meeting on monetary policy of 2016. Economists don't anticipate the central bank will alter interest rates due to the sharp downturn of the S&P 500 and the broader financial sector since the beginning of the year. Meanwhile, November housing prices grew at their fastest pace – 5.8% – since July 2014. Housing stocks rallied on the news. Shares of D.R. Horton Inc. (NYSE: DHI) added 3.6%, while Lennar Corp. (NYSE: LEN) stock gained 4.7%.

Money Morning Readers: Keep reading for more on why the Dow Jones Industrial Average moved higher today. For those new to Money Morning, sign up to keep reading – it's completely free…