Apple reported earnings of $3.28 a share, topping forecasts for $3.23 a share, an increase of just 1.9% from the same quarter a year ago. Still, the $18.4 billion in profit was the most by any company in history. 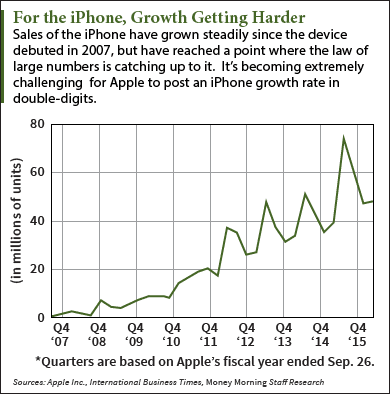 Apple sold 74.77 million iPhones, the product that accounts for two-thirds of those sales. The increase of less than 1% year over year missed forecasts for sales of 76.54 million iPhones.

But most worrisome to Wall Street was Apple’s guidance for the current quarter. The company said it expects revenue of $50 billion to $53 billion in its Q2, significantly below the analyst consensus for revenue of $55.6 billion.

If the midpoint of Apple’s guidance comes to pass, it will represent an 11% drop in revenue year over year. That would be the worst decline in sales for AAPL in 15 years.

The flat numbers in the Q1 Apple earnings and lowered guidance for the March quarter confirmed fears that the company’s iPhone momentum has hit a snag.

In after-hours trading, Apple stock fell about 1%, suggesting that investors had baked much of the bad news into the Apple stock price over the past few months. AAPL stock is down 18% since early November.

Wall Street is awaiting the Q1 Apple earnings not to find out about another record-breaking quarter, but to see if their fears about slumping iPhone sales in 2016 will be realized.

Instead of focusing on what Apple reports for its December quarter (Q1 of Apple's fiscal year), Wall Street will be looking mostly at the company's guidance for Q2.

"The quarter takes a backseat to guidance," Daniel Ives, an analyst with FBR Capital Markets, told USA Today. "Investors are hoping to get some sort of incremental guidance for 2016."

That's because weeks of negative reports from Apple suppliers have convinced analysts that sales of the iPhone 6S models are sagging. And because the iPhone accounts for about two-thirds of Apple's revenue, that very much worries investors.

The reports have led analysts to lower forecasts for Apple's March quarter. Right now the consensus is for revenue of $55.6 billion. If Apple guides below that, AAPL stock will get hit hard.

The Q1 AAPL earnings, meanwhile, are expected to beat the same period last year. The Q1 Apple earnings for 2015 were a blockbuster, with iPhone sales rising 46% year over year to 74.5 million units.

With profits of $18 billion, Apple set a record for the most profit one company ever recorded in a single quarter. So even a small beat will break that record - not that Wall Street will care.

But even if Apple beats the Q1 numbers handily - which is a strong possibility - the focus will be on the March quarter and to some extent the June quarter.

Here's what they've been saying - and why they're getting it wrong...

The story line since last November is that Apple has reached "peak iPhone" and will see very little growth in sales of the device for the foreseeable future.

Some, such as Tavis McCourt and Mike Koban of Raymond James, don't even think the iPhone 7, due in September, will change the calculus. Raymond James has predicted a 10% decline in iPhone sales for 2016.

The negative sentiment has led more than a dozen analysts to lower their 12-month price targets over the past two months, although the average is still about $142 - 42% higher than the current AAPL stock price of about $100.

That's why Apple stock has dropped about 18% since early November, with the volatile markets over the past month amplifying the losses.

But this line of thinking is missing some key factors.

While iPhone sales growth in mature markets like the United States and Europe has slowed, Apple still can make gains in markets like China and India.

Remember, Apple's revenue from China rose 112% in Q3 and 99% in Q4. Despite issues with the Chinese economy and its volatile stock market, Apple has continued to fare well there. That should continue.

China's smartphone market is in transition, with buyers trading up from older 2G and 3G phones for 4G phones like the iPhone. Apple remains a status symbol for the growing middle class there, and will get a major chunk of this upgrade market.

And it's a huge market. At China Mobile, the largest of the country's three carriers, the 4G customer base grew by 64.6 million in the December quarter alone.

Over in India, which is the next major growth market for smartphone, Apple has been busy laying the groundwork for the iPhone.

Last fall Apple made a deal with one major retailer in India, Croma, to do a "store-within-a-store" concept. And just last week Apple filed an application with the government of India to start opening standalone Apple Stores.

Sales of the iPhone in India aren't yet that big - 800,000 in the December quarter, and 1.7 million for calendar year 2015 - but are growing quickly. That December quarter figure represents year-over-year growth of 60%.

Looking further down the road - beyond the iPhone, there's the potential of the Apple Watch, the rumored Apple Car, and how Apple might exploit the Internet of Things - something it is well-positioned to do with its powerful ecosystem.

The negative sentiment on the iPhone and Apple stock is reminiscent of the late 2012 to mid-2013 period.

Back then, weak iPhone sales and expectations for shrinking earnings has pundits declaring that Apple's career as a growth stock was over. It was now a value stock.

How soon they forget.

Things You Didn't Know About Apple: Apple has been around for nearly 40 years now, and is one of largest and best-known companies in the world. But it has a quirky history. And most of this history isn't that well-known beyond the Apple fanboy crowd. Chances are these 15 Apple facts will surprise you...