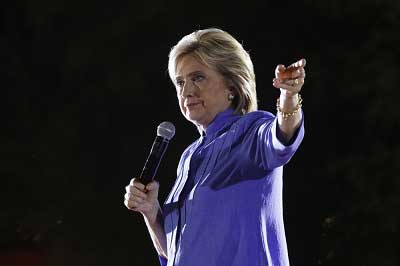 Already retirees' SSI benefits are suffering from low oil prices. The cost-of-living adjustment (COLA) wasn't raised for fiscal year 2016 — as it likewise wasn't in 2010 and 2011 — because of plummeting oil prices and a lack of inflation. This means that when prices do increase, retirees' benefits won't go up in lockstep – thus resulting in increasingly stressed bank accounts and tighter wallets.

Each of the 2016 presidential candidates has touched on how they'll make changes to fix Social Security. But relaying those policies to Americans in a comprehensive way has been a struggle.

Among Democratic caucus voters surveyed by AARP, 51% would like to know more about Democratic front-runner and former Secretary of State Hillary Clinton's Social Security plans.

At a campaign stop in Iowa City, Iowa, on Dec. 18, 2015, Hillary Clinton was asked by a voter about her plan for Social Security. Mrs. Clinton responded by saying she will "lift the cap and come up with other revenues that will come in to ensure the solvency of the trust fund."

Clinton's strategy is to target this particular American demographic…

The wealthiest. Specifically those with "some incomes" that are currently above the Social Security cap. In other words, earners who make over $118,500 a year would pay a larger share of their earnings toward SSI.

She did not distinguish, however, what constitutes "wealthy" or "some incomes."

By lifting the cap, Democrats believe the current expected date of insolvency projected for Social Security – the year 2034 – would be curtailed until 2070, reported The Los Angeles Times yesterday.

Right now, most households in the United States do not make $118,500 annually. Those household that do, however, are still only responsible for paying into SSI up to $118,500.

And while America's wealthiest 1% enjoys the current cap on Social Security, it's about to get even harder for average Americans to get ahead…

Congress has made sweeping changes to the SSI code that will go into effect on May 1, 2016. Those who are currently retired or near-retirement could easily be affected. However, there are filing tactics available now to make the most of SSI — before it disappears as we know it. There are hundreds of thousands of dollars to be made by taking advantage of some of these tactics.

If you've paid 12.4% of your matched income into SSI your whole life – you could be eligible to reap the rewards hidden in the SSI code. Here's how to take back what you've earned before it's too late….

WHAT'S THE NAME OF THE COMPANY?