Is it time to buy Apple stock?

With shares of Apple Inc. (Nasdaq: AAPL) down about 28% from last summer's highs, the company is looking more and more like a bargain. 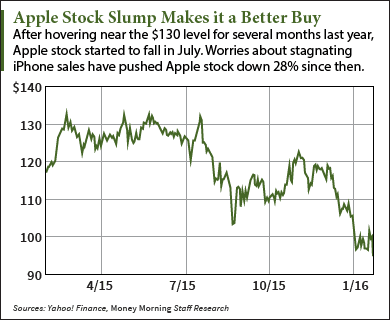 More troubling was Apple's guidance for the current quarter. CEO Tim Cook said Apple's revenue would fall into the $50 billion to $53 billion range, below the analyst consensus. At the midpoint, it represents an 11% drop in revenue year over year, which would be Apple's worst decline in 15 years.

The bad news, which many expected, is why the Apple stock price has taken a beating over the past several months.

And yet in spite of the heavily negative sentiment, now may be just the time to buy Apple stock.

"If you're looking at the long haul, Apple is still a stock to own," Money Morning Defense & Tech Specialist Michael A. Robinson said on the FOX Business Network's "Varney & Co." program today.

"Most of what we've seen from this quarter has already been priced into the stock," Robinson said. "I'm still a buyer at these prices."

Since last fall, Wall Street has worried that the iPhone 6S models were not enjoying the sort of robust sales growth that the iPhone 6 models did a year earlier. That's why the AAPL stock price has been falling, and the Q1 earnings confirmed those fears.

But it's too soon to write Apple off.

What Makes AAPL Stock a Buy

The first question is whether Apple stock will go much lower. Can it get cheaper?

Yes, maybe a little. Given its negative momentum, AAPL stock could easily sink to about $85, but probably no lower. It's notoriously hard to time these things, so investors considering whether to buy AAPL stock shouldn't wait too long.

But what can investors expect from here? Can Apple deliver?

Robinson's $130 target is about 35% higher than where AAPL stock is trading now. And he's not alone in believing that Apple stock will right itself. Even after several Wall Street analysts lowered their Apple stock price targets as well, the consensus is still about $138.

Here are some of the reasons behind that long-term optimism.

For one thing, lost in the dismay over the lack of dazzling growth numbers is the fact Apple made $18.4 billion in profit in Q1 - the most quarterly profit of any company in history.

This means Apple is still raking in enormous amounts of cash - money it can give back to shareholders or invest in research into new groundbreaking products.

It's Too Early to Declare "Peak iPhone"

And iPhone growth is more likely just taking a breather, as it did in 2012, than flattening for good. Apple's global smartphone market share generally hovers around just 15%, meaning it can keep chipping away at Android's dominant share of 80%-plus.

Apple also has untapped potential in China. As Tim Cook pointed out in the conference call, the Chinese middle class is expected to grow from 50 million in 2010 to 500 million in 2020, and many of them will want iPhones.

Over in India, which is the next major growth market for smartphones, Apple has been busy laying the groundwork for the iPhone. It has plans to open more stores there in the next year or so, and sales have already started to accelerate.

Apple sold 800,000 iPhones in India in the December quarter, and 1.7 million for calendar year 2015. That December quarter figure represents year-over-year growth of 60%.

Then there's Apple's thriving ecosystem, which is stronger than ever.

The Apple Ecosystem Is Best-in-Class

"A billion devices connected to Apple's services just in the last 90 days. That's enormous -- $5 billion in service revenue," Robinson said. "They have a built-in customer base second to none in technology and really in the world in any kind of a consumer format."

Apple's services includes iTunes, iCloud, the App Store, and Apple Pay. Yesterday Apple said revenue from that segment was up 23% in 2015.

Of course, many critics say Apple needs to produce another game-changing product like the iPod/iTunes tandem or the iPhone.

The notoriously secretive Apple probably has such a project in the pipeline. It could be the much-rumored Apple Car, or the definitive virtual reality platform. But Apple knows only too well that it needs to continue innovating.

Finally, there's Apple's track record. The company - and AAPL stock - has bounced back from the doldrums more than once.

"History shows Apple sells off, people regain their senses, then it comes back again," Robinson said. "I think institutional buyers are going to be moving back into the stock."

The Bottom Line: To buy Apple stock or not is a key question for investors right now. Worries about iPhone sales growth stagnation have dragged down AAPL, but the long-term case for the stock remains solid. Investors should buy AAPL stock now if they're considering it. The Apple stock price is unlikely to drift much lower, while the potential gains are in the 35% to 40% range.

Things You Didn't Know About Apple: Apple has been around for nearly 40 years now, and is one of largest and best-known companies in the world. But it has a quirky history. And most of this history isn't that well-known beyond the Apple fanboy crowd. Chances are these 15 Apple facts will surprise you...