The U.S. Federal Reserve meeting concluded today with a statement release at 2 p.m.

In its first monetary policy decision of 2016, the U.S. central bank left interest rates unchanged at 0.25% to 0.50%. That decision was widely expected from analysts and investors. 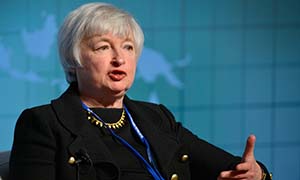 In short, the Fed remains cautious yet not exactly dovish. Some investors hoped the Federal Reserve meeting would end with the committee announcing no more rate hikes would be coming in 2016.

The central bank was not expected to raise interest rates at the Federal Reserve meeting, but markets were anxious about committee members' tone. Those hoping for an absolute dovish commentary were disappointed. Minutes after the statement, the Dow dipped 108 points, or 0.66%. The S&P 500 and the Nasdaq slipped 0.2% and 1.19%, respectively.

The Fed raised benchmark interest rates in December for the first time in nearly a decade after easy monetary policy enhanced asset prices for several years. But stocks have fallen sharply this year amid concerns around China, a slowing global economy, oil prices, and the pace of the Fed's tightening.

When it raised rates for the first time in nine years in December, Fed officials' forecasts signaled four additional hikes in 2016.

But the Fed has not presented a clear picture of when those increases will happen, and that uncertainty is troubling to many investors.

"I know the markets are tough right now," Fitz-Gerald said. "I get that - there are millions of investors who are rightfully concerned about their portfolios, their investments, and frankly, their financial future."

Fitz-Gerald continues, "Don't lose sight of the bigger picture here, though, and, if at all possible, stay in the game. In the low-rate regime the Fed continues to inflict on us, the markets remain the single most powerful wealth-creation tool at your disposal. And that means you can't ignore them in any mission to protect and grow your retirement."

In fact, there are several ways to protect your money, and even profit, in a market like this. Here's our guide on how to invest in stocks during a bear market...

The Fed can't raise rates without blowing the whole system up. Look what a measly quarter of a point has done. More QE on the way.