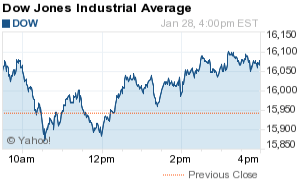 The Dow Jones Industrial Average today (Thursday) gained 125 points on optimism that Russia is aiming to work with leaders of OPEC to reduce global production in order to prevent oil prices from sliding further. The Nasdaq and the S&P 500 were on the rise ahead of critical earnings reports from Alphabet Inc. (Nasdaq: GOOGL) and Amazon.com Inc. (Nasdaq: AMZN), which come after the bell. In addition, pay attention to an earnings report from credit card giant Visa Inc. (NYSE: V).

On the economic front, U.S. jobless claims were lower than expected, according to data from the U.S. Labor Department. The positive news comes a week after benefit seekers hit a six-month high. Meanwhile, U.S. durable goods orders slumped 5.1% in December, while orders fell overall by 3.5% for the full 2015 year. That marks the largest annual decline in six years.

The Iowa Caucus is just four days away. Here’s everything you need to know about this important electoral event…