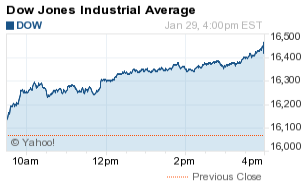 On the economic front, the Chicago PMI reached 55.6 this month. That figure beat economist expectations of 45.0 and December's reading of 42.9. Meanwhile, the U.S. Commerce Department's first estimate on Q4 GDP registered below economist expectations. The world's largest economy grew by 0.7% during the period. That's a sharp decline from the 2% growth in the third quarter.

The Iowa Caucus is just three days away. Money Morning Associate Editor Cameron Saucier breaks down everything you need to know about this important electoral event...