And it will help decide the outcome of the 2016 presidential election. 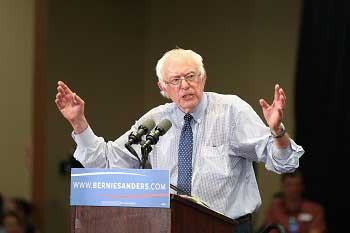 Democrat Bernie Sanders speaks to a full crowd at the Medallion Center in Columbia, S.C., on Aug. 21, 2015.

A Gallup survey published on April 29 revealed that 66% of Americans believe Social Security is in a "state of crisis." Slightly more than half of those still working doubt they will ever receive Social Security benefits.

Each of the 2016 presidential candidates has touched on how they'll make changes to fix Social Security.

At a meeting with union workers in Des Moines, Iowa, on Monday, Sanders criticized Democratic rival Hillary Clinton on her vagueness regarding Social Security reform.

Sanders' plan calls for increasing Social Security benefits to seniors by an average of $65 a month, reported Time. He would pay for the plan by lifting the cap on taxable income for Social Security to ensure that those earning more than $118,500 pay a larger share of their income.

Clinton has also called for lifting the cap on Social Security taxable income. However, Sanders has been markedly more specific about his plans than the former secretary of state has...

The Vermont senator advocates that the cap be raised to $250,000 per year:

It so happens that it's Sanders' Social Security policy that appeals to a majority of Americans -- even though he's viewed as an extremist on many other issues...

According to 2014 informal poll run by The Washington Post that allowed respondents to choose from as many as a dozen solutions to Social Security, 70% believed raising the earnings tax cap was the best move.

It's also the move that would affect the smallest number of people, reported The Washington Post, since a relatively low percentage of American taxpayers earn more than $250,000 per year.

Though many Americans don't make $250,000 a year - or $118,500, for that matter - a large portion of the U.S. population is about to be greatly affected by upcoming Social Security policy changes...

Those who are currently retired or near-retirement could easily be affected. However, there are filing tactics available now to make the most of Social Security benefits -- before they disappear as we know it. There are hundreds of thousands of dollars to be made by taking advantage of some of these tactics.

If you've paid 12.4% of your matched income into SSI your whole life - you could be eligible to reap the rewards hidden in the SSI code. Here's how to take back what you've earned before it's too late....