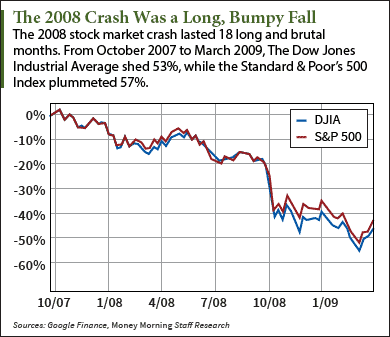 Months of thrashing markets and a lot of big down days have triggered chatter about whether we're facing another 2008 stock market crash scenario.

The urge to compare the 2008 stock market crash to the market pullback in 2016 picked up speed when billionaire investor George Soros chimed in a few weeks ago.

"When I look at the financial markets there is a serious challenge which reminds me of the crisis we had in 2008," Soros said at a Jan. 7 economic conference in Sri Lanka. "Unfortunately China has a major adjustment problem and it has a lot of choices and it can actually transfer to the rest of the world its own problems by devaluing its currency -- and that is what China is doing."

Soros is taken seriously in financial circles. He correctly predicted losses prior to the 2008 stock market crash as well as the downturn in 2011.

And he's been joined by some other influential voices.

Andrew Roberts, the credit chief for the Royal Bank of Scotland, has told his clients to "sell everything except quality bonds," saying that "China has set off a major correction and it's going to snowball."

And Albert Edwards of the French banking giant Societe Generale SA (OTCMKTS ADR: SCGLY) predicted last week that the S&P 500 would fall 75% from its peak. 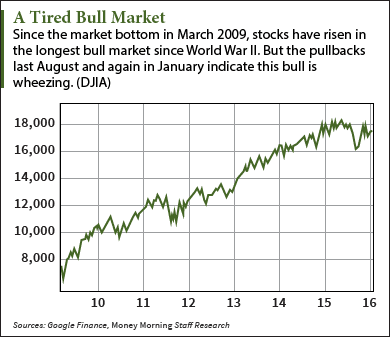 The downbeat talk brings back a lot of bad memories. The 2008 market crash was one of the worst in U.S. history, with the Dow Jones Industrial Average plunging 53% and the Standard & Poor's 500 Index falling 57%.

But the 2008 stock market crash didn't happen over a period of just a few months. It was an 18-month-long ordeal, with several upticks along the way that gave investors false hope.

If this is history repeating itself, we have a long way to go.

So let's dig a little deeper and see how the root causes of the latest downturn match up with the 2008 market crash - as well as what this all means for investors ...

Fueling the housing bubble was the subprime mortgage phenomenon. Hundreds of billions of dollars' worth of mortgages were granted to unqualified buyers, creating a massive amount of debt that could not be repaid.

Obviously, the United States is not experiencing another housing bubble now. But as in the 2008 crisis, the world today does have a major economy with a vastly inflated real estate market: China.

That's because China invested billions into real estate over the past eight years, driving up prices to unsustainable levels. Over the past year, real estate prices in China have started to fall.

The problem is that real estate makes up the bulk of Chinese household wealth - 74.7%. So when prices start to fall, it has a huge impact. Chinese homeowners will start to go underwater. While Chinese citizens aren't going to lose their homes, they will lose wealth - and that means less spending.

The decline in China's housing prices started in late 2014, and by summer the impact hit the Chinese stock market. Since early June, the Shanghai Composite Index is down about 47%.

A similar scenario played out in the United States as well when the housing bubble burst, starting in late 2005. With the "wealth effect" of bloated home values gone, consumer spending cratered.

All of that played a role in the 2008 stock market crash, as corporate earnings tanked. The imploding U.S. economy dragged the rest of the world down with it.

Still, it's not given that China's woes will bring on a repeat of the 2008 stock market crash. The severity of that crash resulted from deep systemic problems, which don't seem to be an issue this time around -- at least not yet.

You Can Prepare for a Bear Market in 2016

But China's economy is too big, and the world too dependent on it, for its problems not to ripple out into the global stock markets - including those in the United States. And given the steady stream of troubling news out of China, the worst may be yet to come.

That means investors need to be ready for more turbulence. Even if we don't get a full-blown stock market crash, we could very well end up in a bear market.

"I know the markets are tough right now," said Money Morning Chief Investment Strategist Keith Fitz-Gerald. "But don't lose sight of the bigger picture here, though, and, if at all possible, stay in the game."

Fitz-Gerald recommends investors look for bargains among stocks they plan to hold for a longer time horizon, such as five to 10 years.

But realize that when the stock market recovers, these inverse plays will fall.

The Bottom Line: The volatile stock market of 2016 has given rise to a lot of warnings that we're facing a replay of the 2008 stock market crash. China's real estate problems now do bear some similarities to the U.S. housing bubble that preceded the 2008 crisis. But since we haven't seen the systemic problems that made that crash so bad, the odds are we won't see the kind of steep losses of 2008. Still, investors need to prepare for further volatility in 2016 - as long as China is in economic duress, global markets will feel the impact.