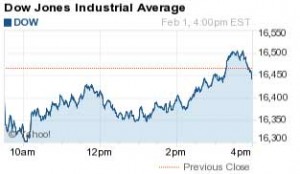 The Dow Jones Industrial Average today (Monday) slipped 17 points after another round of weak Chinese economic data renewed concerns about a global cooldown. Meanwhile, oil prices continued to slide on rumors that OPEC may conduct an emergency meeting to address falling demand around the world. Shares of global search and technology giant Alphabet Inc. (Nasdaq: GOOGL) were on the rise ahead of its earnings report after the bell.

On the economic front, the Institute of Supply Management Manufacturing Index remained at 48.2, the fourth consecutive monthly reading under 50. This is the longest streak of manufacturing payroll contractions since the Great Recession in 2009. Meanwhile, Federal Reserve Vice-Chair Stanley Fischer said he doesn't know what the U.S. central bank's next move will be with monetary policy. The second-in-command to Janet Yellen said global turbulence threatens to keep inflation levels very low. According to CME Group FedWatch, there is a 17.4% probability that the central bank will raise its benchmark rate to 0.75 in March.

The Iowa caucus is today. Here's everything you need to know about this important electoral event...