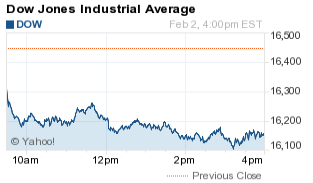 The Dow Jones Industrial Average today (Tuesday) slipped 295 points as oil prices slumped and mixed earnings reports rattled investor confidence. As earnings season kicks into gear, growing concern about a recession has become a primary theme of executive communications. According to Thomson Reuters data, at least 92 companies have raised the prospect of an economic recession hitting the United States this year. That's a 33% increase compared to data from the previous year.

With today's 295-point plunge and fears of a recession, we may be heading for a full-on stock market crash. Here's what our team of Money Morning experts predict will happen in 2016...