There's almost nothing the Fed won't do to try and reach its official 2% inflation target, and as we saw once again at the FOMC meeting last week, nothing they've tried so far has worked.

But the central bank made a far worse, "classic" policy mistake after the Crash of 2008… And the stock market's steep sell-off and surging volatility are telling us that error could be about to scuttle the United States' and even the global economy.

You see, all of the bad debt that helped trigger the financial crisis was never written off, and there are signs that debt deflation – and not the Fed's sought-after inflation – could break out soon, with disastrous consequences.

But I'm going to show you how an inflation hedge can really pay off big in a deflationary spiral. It gave us protection and double-digit profits in the last half of 2015, and, even better, it's paying investors more cold, hard cash right now…

Intuitively, cheaper stuff is supposed to be good. Normally, lower prices should stimulate the economy through lower input costs.

But crashing oil and commodities have fed into the deflation vortex.

Of course the effect is not immediate; it can take up to two years for the initial signs to appear.

Still, so far that hasn't happened, despite the fact that oil's been dropping since mid-2014, and commodities have been heading down since way before that.

The flipside is lower revenue and lost jobs for the companies whose goods are now cheaper, which in turn hurts profits and consumption.

Yet there's a lot more going on than just a weak materials sector. The problem is structural and unlikely to go away until the root has been dealt with, something the Fed's done everything in its power to avoid.

It's no secret that the Fed opted to bail out banks instead of individuals and the broader economy during the crisis years.

But, even worse, they allowed hundreds of billions of dollars in debt to stay on the books, as Ben Bernanke famously subscribed to the theory that debt deflation is no more than a redistribution from debtors to creditors and therefore had "no significant macroeconomic effects."

Michael Hudson, a distinguished Research Professor of Economics at the University of Missouri, Kansas City, who also happens to advise a number of world governments, said this to Washington's Blog: "The debts were left in place in 2008 instead of being written down. So the economy is now in a classic debt deflation. QE seeks to inflate asset markets, not the real economy. The choice in 2008 was whether to bail out the banks or the economy – and the former were bailed out – the political Donor Class."

And Bill Black, Head of School of Economics, History & Politics at Kingston University in London said we'll have "a never-ending depression unless we repudiate the debt, which never should have been extended in the first place."

Despite what we're supposed to think, all this papered-over debt is like a blanket of wet dollar bills dampening the few smoldering embers of the economy. It's suffocating the possibility of any kind of real recovery.

Other critical segments of the economy don't look much better, and some of them are downright worse.

Don't Believe the Myth of a Tightening Labor Market

On Jan. 4, 2016, we got the most recent monthly reading from the Institute for Supply Management. It was bad news.

That marked the second consecutive month of contraction for economic activity in the manufacturing sector. And that's showing up in jobs.

Despite U.S. unemployment falling from 5.7% to 5% through 2015, it's the retail trade that's recovered and essentially picked up the slack. Meanwhile, higher-paying manufacturing jobs are still 13.5% below 2007 levels.

By digging a little deeper, you can see that the damage is deeply rooted…

This chart from the St. Louis Fed demonstrates the level of labor force participation by civilians. 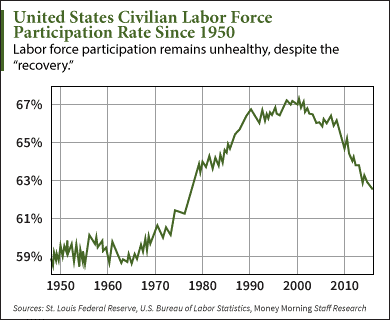 As you can see, the financial crisis led to a massive decay in the labor market, with current participation rates reaching levels last seen back in the 1970s.

So it's no stretch to understand the implications of the next chart.

Again, courtesy of the St. Louis Fed, here's a clear illustration of the decline in U.S. household income, while adjusting for inflation. 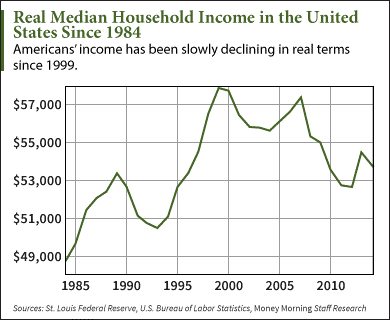 It's been heading mainly south after peaking in 1999. That's 16 years of lower average household incomes on balance.

Odious debt, a profoundly unhealthy labor market, and steadily declining incomes: The stage for an American deflationary crisis has now been fully set…

All We Need Now Is a Catalyst for Economic Disaster

Drawing on parallels, the Great Depression suffered a dramatic deflation in agriculture. Many more people were employed in farming back then than today, so the effect cannot be underestimated.

Even after recovering substantially from 2009 to mid-2011, base metals have been in a steady decline ever since. In fact, they've been pulverized.

As any recovery has been anemic at best, prodded along by increasingly less effective ZIRP and central bank quantitative easing programs, demand has withered as production has held up.

That's because such massive commitments were already in place to develop and/or ramp up base metals projects, and thanks to long lead times, all despite falling prices.

Basically, major construction and development decisions were made in a much higher metals prices environment, long before those prices fell along with demand.

So these projects went ahead, adding to supply under a scenario of shrinking demand, further exacerbating already weakening prices.

One illustrative case in point is Anglo American Plc. (LON: AAL), which trades in London. Management recently announced a radical restructuring. It's planning to cut jobs by more than half, fully 85,000 workers over the next few years from the current 135,000.

Anglo plans to sell off some 60% of its mines to concentrate on its operations that will turn a profit in a scenario of even worse commodity prices.

Sadly, sustained low metals prices are leading to growing numbers of bankruptcies, which will in turn lead to more unemployment. And these are often relatively high-paying jobs.

The effects of this across the entire sector could easily ripple outward and rock the American economy, sending it over the tipping point into a deflationary crisis.

Before that happens, I recommend you pick up shares of this powerful hedge…

The Best Play for a Deflationary Crisis

Back in July, I told you how the trend toward home ownership had fallen to levels seen back in 1993.

That has pressured rents, and rental housing, to move higher.

I made the case for Equity Residential Properties Trust (NYSE: EQR), the largest residential REIT in the United States, as an inflation hedge.

But, in my view, the beauty of these shares is that they could also outperform amid deflation.

Deflation would hurt home prices, as we saw from the mortgage crisis of the last decade. Underwater homeowners may walk away from their properties, but they still need somewhere to live.

That's where rentals come in. Many of these displaced owners will turn to renting, and the surge in demand will help push rents higher.

In fact, we've already seen that happen in several of the United States' largest cities, with a record high of 20.7 million families paying 30% – or more – of their income on rent.

Meanwhile, Equity Residential Trust continues to boast an operating margin of 36% and a profit margin of 32.6%, with a return on equity north of 8%.

When I originally recommended EQR shares in July, it was trading around $71. Today, after the sell-offs over the summer and in January, shares are actually 12% higher and still yielding 2.84% in dividends.

Considering the Fed's track record of failure, the threat of deflation could be even worse than inflation, but either way, EQR is one solid option for both eventualities.