Alphabet stock has hit a milestone only a select few companies ever reach. 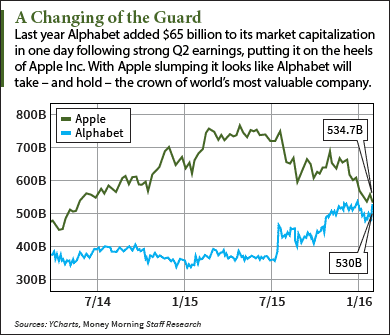 Last night Alphabet Inc. beat on its Q4 earnings. The company earned $8.67 a share, walloping expectations for earnings of $8.10 a share. Revenue of $17.3 billion exceeded forecasts for $16.9 billion.

The strong showing sent Alphabet Inc. stock soaring nearly 5% in after-hours trading, unofficially making it the market-cap champion with a valuation of about $550 billion.

Alphabet stock held onto gains of more than 4% after the market open, putting its market cap at about $552 billion. That easily eclipsed Apple's market cap of $528.5 billion, which fell again as the stock slipped another 1%.

But what's remarkable is that Alphabet has reached this pinnacle with so much growth potential ahead of it.

While mostly symbolic, the title of biggest company in the world illustrates the changing fortunes of industries as well as individual companies.

And at the moment, it's Apple, Alphabet, and Microsoft – all tech titans. (Facebook Inc. [NYSE: FB] is in fourth, having recently passed Exxon Mobil.)

Apple displaced Exxon Mobil in 2013 as the world's most valuable company – and only then after a two-year see-saw battle.

These are the top 10 companies by market capitalization (as of Feb. 1 market close):

It was only in mid-2013 when Alphabet Inc. pushed its way into the top 10 most valuable companies.

Last July Alphabet stock got the second-largest one-day market cap boost of all time – $65 billion – following a stellar Q2 earnings report. That pushed Alphabet Inc.'s valuation past $460 billion and vaulted it into second place behind Apple.

Alphabet Inc. is about to join a very select group of stocks – according to Standard & Poor's, only 11 others have held the crown.

Why Alphabet Stock Is Soaring – and Pumping Up the Market Cap

Alphabet Inc. makes most of its money from Google searches. Its ability to dominate search is what has made Alphabet so valuable today.

Alphabet has also made some smart, revenue-generating acquisitions. RBC Capital Markets analysts estimate that YouTube alone will generate $7 billion in revenue in 2016.

The Google portion of Alphabet – search advertising, Android, and YouTube – generated $74.54 billion in revenue and $23.43 billion in operating income in 2015. The full-year revenue for these segments was up 13.5%, while operating income rose 23.3%.

Net income for 2015 was $15.9 billion – nearly double the $8.5 billion the company earned just five years earlier. That kind of earnings growth tends to drive a stock.

But investors like to know a company is planning for the future, and Alphabet has invested heavily in a lot of cutting-edge projects in the pipeline that are losing money now but will pay off down the road.

"The secret to Google is not necessarily what they're doing now, but the fact that they've got companies with artificial intelligence, they've got the car, they've got the phones – lots of things are within Google. The move to Alphabet is the first step of breaking that up and unlocking a lot of value," said Money Morning Chief Investment Strategist Keith Fitz-Gerald.

People sometimes forget that in addition to the "moonshot" projects like the self-driving car, Alphabet has branched into the Internet of Things with its $3.2 billion acquisition of Nest in 2014. And its gigabit broadband service, Google Fiber, continues to quietly gain traction.

In fact, Alphabet fancies itself as a tech conglomerate for the 21st century – a sort of Berkshire Hathaway 2.0.

"If you're an investor interested in a long-term performer, you want something you know is going to be there, Alphabet is a company worth looking at," Fitz-Gerald said.

The Bottom Line: Alphabet Inc. stock has taken the crown of world's most valuable company from Apple and is unlikely to surrender it for a long time. In addition to strong growth in the businesses that made Google a household name, the company is investing in a lot of projects that will pay off in the future.

Apple Stock Still a Buy: On the heels of a disappointing December quarter, Apple has lost its crown as world's most valuable company. But that doesn't mean Apple stock has become a dog overnight. The company has hit speed bumps before and always bounced back. Here's why Apple stock is a bargain right now…