We've been focusing on what you can do to make money and protect your profits when the markets are tanking.

And although U.S. stocks closed on a high note last Friday...

Some are saying that the worst of the year is still ahead.

So today, I'm going to give you a power play for smaller upward stock moves.

It's an options trading strategy that can rake in the big bucks from slighter market bounces like what we saw last week.

And when you find out what it is... 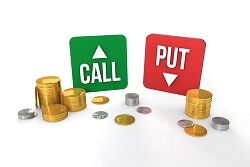 When you want to move on a stock that has an opportunity to go higher in price, I'm willing to bet that the furthest thing from your mind is a put option strategy.

You might even be reading this right now and wondering if I've completely lost my mind.

After all, why on Earth would you ever consider using a put option for a stock that's moving higher?

But I assure you... I'm perfectly fine, and my thinking couldn't be any clearer.

So today, we're going to talk about why you can use put options to take advantage of a stock that's moving higher.

And it's called the bull put spread.

But before we get into it, let's do a quick refresher on put options...

A put option gives the buyer of the put the right, but not the obligation, to sell the stock to someone. Another way of saying this is that you have the right to "put it" to someone. And in order for that put option to increase in value, the stock has to drop in price.

When the stock is at $41, at expiration the option is at least $4.00 in the money. This is referred to as intrinsic value (IV), and that IV is the price of the option at expiration. If what you originally bought for $2.00 can now be sold for $4.00, then you're looking at a 100% return on investment - or a double.

Now if the stock goes higher, say to $50, then there is no IV, and there's no time value at expiration, which means the option can expire worthless.

So if we know that you need the stock price to move lower and NOT higher, then how do we arrive at the bull put spread?

This is a strategy you would use when you expect the stock to make a move moderately higher. And though the strategy that you'd think to use most of the time is the long call, the reason behind considering a bull put spread is finding a spread that could minimize the cost of a long call.

Now one might consider selling naked put options, but as I said a couple weeks ago, that's too risky. Most brokerages won't even allow you to do this in your account.

Here's an example of why...

Let's say you've been watching Citigroup Inc. (NYSE: C) and you think it can go higher.

In this example, Citigroup is trading at $42.50. So if you sold a $45 put, then you've sold the right to anyone to force you into buying the stock - or "putting" the stock to you - at $45. If the stock goes higher than $45, the market isn't likely to "put" the stock to you - or make you buy it - when it can be sold at a higher price in the open market.

So the option ends up expiring, which means you get to keep the premium (or the income you received from selling the option).

But the risk here is substantial...

Now although this loss is offset by the premium you took in, the risk on a naked put is just too substantial... which is why I will never recommend this strategy to you.

A bull put spread is a "put credit spread" where you set the trade up for a credit to your account. And if all goes well, it will be released upon expiration when the options expire worthless.

This may remind you of another strategy we've talked about - the bull call spread (or call debit spread). You've seen me refer to this as the "loophole trade," and we also this strategy when we expect the stock to go higher. This strategy involves a "transaction cost" (or the expenses you incur from buying or selling) of buying what's needed in order for the trade to pay off. The difference in the spread is offset by the cost of setting it up, and you have fees and commissions when that happens. When the options expire worthless, there is no transaction... hence no transaction costs.

In a bull put spread, you would typically buy a put option and then sell the next higher strike price option.

Below is an example of buying a $40 put option and selling a $45 put option at the same month's expiration.

To highlight what we're looking at in the images below, I've numbered them as follows:

There is much more profit potential on a long call, but that would incur a cost, whereas the bull put spread generates a credit to the account. As long as the stock gets above (and stays above) $45, maximum profitability would be achieved.

And even though you might miss out on the possibility of unlimited reward for a long call, the probability of the stock reaching that maximum profitability point is higher in a bull put spread option. In this scenario, the stock only needs to get above $45 for this option trade to pay out.

The risk graph below illustrates the maximum risk and maximum reward potential of this trade. 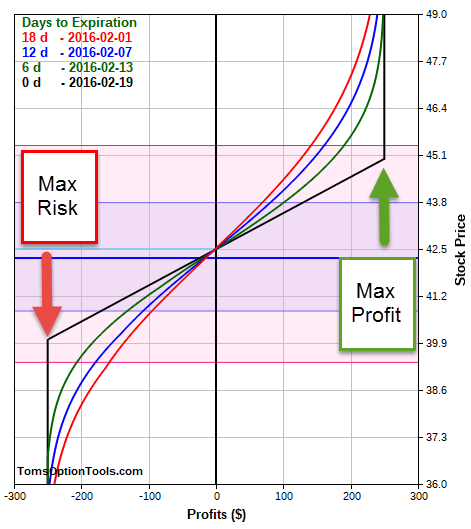 Anywhere above the $45 stock price gives you a maximum reward of $2.50. The reason being... if the stock is greater than $45 at expiration, would anyone in the markets sell it to you for LESS than the current market price of over $45?

The answer is likely no.

And in that case, would you have the necessity to force someone to buy the stock at $40?

In this case, both options expire worthless and no transaction takes place, so there are no transaction costs or fees - and you get to keep the full credit of $2.50. Since your risk was technically $2.50, making $2.50 on it gives you a double.

One thing to keep in mind...

Since probability increases with a bull put spread, then there is less risk... hence less reward. So that is the trade-off that you'll need to decide on.

But in instances like this one, where even a reduced-risk situation offers a 100% return potential... I can get on board with that.

The bottom line is this: You can bank a nice profit on slighter stock moves (such as to a resistance level) using a bull put spread, or you can stick to long call positions if you think the stock is due for a HUGE upside move.

But consider the potential of the bull put spread when you make your choice.

Finding the Price Moves That Matter: Good traders use patterns to calculate their next moves. These two indicators can identify how a stock price will move before it actually happens. Better yet, these patterns occur in any market condition, making them especially useful in today's volatile markets...

on the bull put spread for options what are the house costs. Do they charge per option or do they charge a standard fee for up to the first 10,000 options as they do for stock shares? I am thinking if your profit is $2.50 per option you will need at least 1,000 options to make money on this?