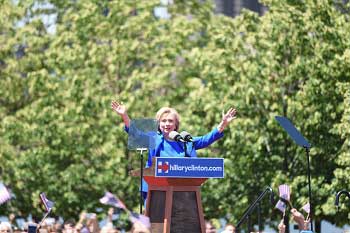 Democratic presidential hopeful Hillary Clinton at a rally on Roosevelt Island in June 2015.

Then mainstream media sites changed their tunes on Tuesday. They declared Clinton the ultimate victor - chiefly by winning a series of coin tosses.

While that's where much of the media coverage left off, some outlets have since revealed a discrepancy in one Iowa precinct. Specifically, Sanders' campaign sounded the alarm that the former secretary of state may have used dirty and highly irregular tactics to win the Hawkeye state, reported MSNBC on Feb. 2.

Did Hillary Clinton cheat in Iowa?

Did Hillary Clinton Cheat in Iowa by "Packing the Caucuses"?

The controversy actually started on Jan. 31 when voters from Hawarden, Iowa, received mailings from the Clinton campaign asking them to caucus for her on Monday evening. While the request itself wasn't unusual, who it came from certainly was...

You see, these letters were written by Morgan Luther, who identified himself as the precinct captain for Hawarden. Precinct captains are responsible for gathering supporters for particular candidates at local caucuses, and they are chosen from among local residents.

However, Luther was chosen by Clinton's campaign -- and he is not a resident of Hawarden.

In fact, Luther is not even a resident of Iowa.

Before the caucuses took place, the Sanders campaign said the letter raised suspicions that these out-of-state staffers might actually be counted as caucus voters. Both Democratic hopefuls employ out-of-state staffers in their campaigns, reported Yahoo! News on Jan. 31, but Sanders did not insert paid, non-local staff into official caucus roles.

Considering how close the race was, the fine print, in this case, may be the difference between a Sanders victory and a Sanders defeat.

The Vermont senator told MSNBC yesterday that he has not officially conceded Iowa and that he is considering asking for a recount.

Meanwhile, more reports of Clinton voter fraud are popping up in the wake of the Iowa caucuses. C-SPAN reportedly caught a caucus chair and Clinton precinct captain on tape intentionally reporting inaccurate results of their count Monday night.