GoPro stock is trading just above its all-time low today (Wednesday), opening at just $10.28 per share. That's why many investors are contemplating buying into GoPro stock now that it is trading at such a "discount."

For the answer, we turned to Money Morning Chief Investment Strategist Keith Fitz-Gerald. He's a seasoned market analyst and professional trader with more than 30 years of global experience who has been following GoPro stock closely since the IPO. 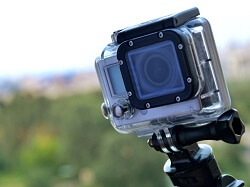 But first, here's what to expect from the GoPro earnings report...

Analysts have been sharply cutting their GoPro stock price estimates since Jan. 14. That's when the company cautioned sales for the crucial holiday quarter would be worse than expected. In addition to the sales warning, GoPro said it would be letting go of 1,500 employees, or 7% of its workforce.

In October, GoPro forecast that revenue would decline 17% year over year in Q4. That was a stark turnaround for the company, which had averaged quarterly growth of 47% over the previous eight quarters. GoPro further reduced its Q4 guidance on Jan. 14.

One of the biggest problems has been the lukewarm reception to the new compact GoPro4 cameras. Several analysts have expressed concern about the potential for GoPro's cameras to gain broad appeal beyond its core group of extreme-sports enthusiasts.

Still, the Hero4 was expected to be a hot seller during the holidays. But projections for the Hero4 cooled ahead of the crucial shopping season, and GoPro trimmed its guidance. Sales have been soft since the ice-cube sized camera debuted in July. The camera was GoPro's attempt at an entirely new design from its traditional action-camera models.

GoPro trimmed the Hero4 price by 25% in late September. In December, the company slashed the price again. The Hero4 now sells at half of its debut price of $400.

GoPro said it would incur a $21 million charge related to further price changes to the Hero4 in December.

Some bargain hunters are wondering if they should buy GoPro stock after earnings since much of the bad news is likely already priced in. Here's our advice on GPRO stock...

We recommend avoiding GoPro stock in 2016, even though the stock is very cheap right now.

GoPro has plans for a consumer drone, which sounds promising. But the space is growing crowded and GoPro faces heated competition from competitors like Amazon.com Inc. (Nasdaq: AMZN).

Ahead of the earnings, Piper Jaffrey again lowered its GoPro price target to $7.50 from $9. In January, the firm cut its price to $9 from $15.

The firm noted the charge GoPro was taking for excess inventory was small relative to the inventory the camera maker actually has.

"We remain on the sidelines in the near term as it appears unlikely this will be the last estimate cut, given the relatively small amount of inventory reduction," Goldman said.

At least a half-dozen other firms have also lowered their GoPro stock targets.

Wall Street has finally turned bearish on the GoPro stock price, but this is a position we've held at Money Morning since the IPO...

Why We've Been Bearish on the GoPro Stock Price

At its all-time high hit in October 2014, GoPro's stock price traded as high as $93.85. At the time, Money Morning Chief Investment Strategist Keith Fitz-Gerald told investors to ignore the hype.

"GoPro makes some really cool products, and they've got a rabid fan base of people who film themselves and others doing some truly outrageous things," Fitz-Gerald said last month. "But that doesn't mean they've got sustained profit potential. The company has engaged in deep, deep discounting this holiday season, and that's going to eat into margins."

And according to Fitz-Gerald, there is no reason to buy GoPro stock even though it's discounted...

I would buy it..its a company that has potential

their bubble has officially burst, but long term solid investment.