It was expected - the Chipotle stock price is down over 5% in intraday trading today (Wednesday) after the company announced its Q4 2015 earnings.

The earnings were so bad that Chipotle Mexican Grill Inc. (NYSE: CMG) co-CEO Steve Ells called this past quarter "the most challenging period in Chipotle's history." 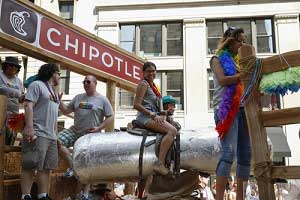 When I reviewed the data, there was one big number that jumped out. And it's a number that is going to have a major impact on the Chipotle stock price throughout 2016.

But before we get to that figure, here's the Chipotle earnings information that sent the stock lower today...

Chipotle reported earnings per share (EPS) of $2.17 on $999.7 million in revenue. The fast-casual dining company beat EPS expectations of $1.85, but it fell short of the $1.01 billion in revenue that was expected.

Money Morning has extensively covered the Chipotle E. coli outbreaks and the effects the situation has had on CMG stock. At the end of December, 53 cases throughout nine states had been reported connected to an original outbreak. As of Dec. 20, health officials were investigating five new claims that were connected to a different strain of E. coli linked to Chipotle.

Here's the one number that will control the direction of the Chipotle stock price in 2016...

The Chipotle Stock Price Will Plummet Until Same-Store Sales Improve

Part of the reason the Chipotle stock price is down today is because of disappointing earnings. But the bigger picture to focus on is same-store sales.

Chipotle reported that same-store sales for locations that have been open for at least one year were down 14.6% in Q4.

You see, the Chipotle stock price will only rise when the company regains customer trust...

The McDonald's Corp. (NYSE: MCD) stock price suffered as well in July 2013 when concerns over the quality of the meat it was purchasing in Japan emerged.

From the end of July to the end of August, the MCD stock price dropped 4.49%. MCD stock traded down 1.7% over the next two years.

The Bottom Line: The Chipotle stock price is down because the company didn't meet quarterly earnings expectations, but the bigger picture is CMG's dismal same-store sales. CMG is not a stock to own in 2016, as it could fall even further until the company restores trust with customers.