As the Executive Editor at Money Map Press, I work in a "news-rich" environment, constantly bombarded with newsletters, news summaries, and other alerts in all formats.

Don't get me wrong – I seek these sources out because they're extremely helpful to me in uncovering profit trends, and, by exclusion, finding investment opportunities and angles no one else is looking at.

That's exactly what happened at 2:00 p.m. on Monday, when a New York Times alert popped in the lower right-hand corner of my computer screen…

"Breaking News: The Zika virus is a global emergency, the WHO said, citing possible links to infant brain damage."

This news brings a critical consideration for investors…

What You Don't Know About the News Can Hurt You 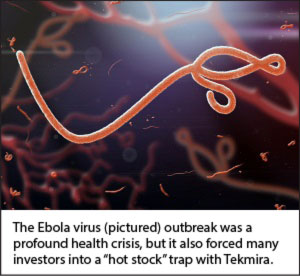 There have been many, many stories where enterprising journalists have reported on a specific news event from a "here's how to play it/here's the beneficiary" angle.

During my 22 years as a reporter, I saw plenty of them. And I've seen investors get burned plenty, too.

I call it the "Hot Stock Trap."

You see, back in summer 2014, after stories of an Ebola outbreak in Africa hit the newswires, CNN found its beneficiary angle – and reported that two Americans infected with Ebola in Liberia were being treated with a drug developed by Mapp Biopharmaceutical Inc., a privately held biotech based in San Diego.

Tekmira's shares soared 30% that week, and then rocketed as much as 27% the following Monday after the media reports ignited speculation that the outbreak might prompt unilateral approval of the Tekmira drug TKM-Ebola.

But Tekmira was a textbook "hot stock trap." And "Johnny-come-lately" investors who bought at the peak got burned – the stock was soon down more than 20%.

Now, of course, the Zika virus outbreak I mentioned has journalists and analysts again scurrying for "beneficiary" stocks.

But it's critical to look past the specific story here and consider the bigger picture of what this all means.

And whatever "next threat" follows… as I assure you it will.

The ongoing growth in global travel – particularly to the developing world – means the pandemic threat is never far from our minds. And better screening technologies – combined with the faster communication potential of the Internet – means we'll learn about pandemic threats as they emerge in the farthest reaches of the globe.

Because we know that, instead of scurrying after each of the "unique beneficiaries" that emerges with each new threat, I'm focusing on finding investments that will benefit from all the threats – and that will also benefit from the more staid medical needs that exist in between threats.

I'm looking at one company in particular right now… With all the threats we face these days, it's just the sort of stock you want to own for the long haul.

I'll be updating readers more on this company soon. In the meantime, be sure to avoid any "hot stocks" that you hear from mainstream media as the next big Zika virus outbreak "winners." Without a stable history of success in medical treatment, many will end up as the next Tekmira.

Eight cities across the country are now being closely monitored by the CDC for outbreaks of the deadly (and highly contagious) MDR pathogens. This quickly developing situation has "the potential to harm or kill anyone in the country," according Dr. Tom Frieden, director of the CDC. When you see this story, you'll see exactly why he's right…

The speaker for the breakfast meeting I attended today was an internationally known epidemiologist. His clients include WHO, CDC, and DOD among others. The Zika virus is spread by a mosquito that can breed its 2,000 or so eggs in the stagnant water of a discarded bottle cap. Ships carry them worldwide in cargo holds. It hitches rides in airplanes. Zika and another virus, not mentioned by WHO, is killing millions in central and south America, particularly Brazil. There are no short-term "magic bullet" cures for either one of these viruses and both of them can kill you.
His advice is to clean up your trash. Deny the mosquito its stagnant-water breeding spots. Wear light colored clothing. Minimize exposed skin. Use DEET. Wash hands and use common-sense sanitation. Stay indoors or behind tent screens during times mosquitos feed. Cook meat thoroughly, especially poultry, pork and ground meat.
Mosquitos are carriers of pathogens that will kill up to 4 million people in 2016. Do not be one of them.

GREAT comments. It's funny – by "funny," I mean … "it's an interesting coincidence" .. I had a similar discussion with folks here in house. I'm a big history buff. And as I was writing this, I remember reading about the U.S. construction of the Panama Canal back in 1904.

Most folks don't realize this, but America wasn't the first country to take a crack at that project. In the 1840s, I believe, the Britts thought about cutting through the Isthmus of Panama, but were put off by the health risks (yellow fever). Forty years later, the French – who were giddy about the success building the Suez Canal in Egypt – took their shot.

As one historian said, though, they "did not account for the deadly mosquitoes: 22,000 of the project’s workers died after contracting malaria and yellow fever." The death toll was so bad that costs skyrocketed and the canal's owners were forced into bankruptcy.

So when the U.S. bought the property in 1904, it put the U.S. Army on the case … and the military set to work trying to kill every mosquito in Panama. Thousands of soldiers were sent there … and they drained swamps, coated lakes with oil and used explosives to blow up still water gatherings. Buildings and other areas of risk were doused with pesticides.

The upshot: When the canal opened in 1914, the death toll among workers was only 5,000, a quarter of the blunted French effort and over a much longer stretch.

Thanks for taking the time to offer your comments. They were interesting, well-researched, well-thought-out and generally excellent.

Hope we hear more from you ….

That picture used in the Zika virus story is the ebola strain.

The electron microscope image of Ebola is one way of creating an alarmist cast to Zika but it's a bit 'over the top' when the most alarming thing about this virus is the high incidence of infants born with microcephaly vs. the high death rates seen with Ebola.
Here is a link to an article that shows a photo of Zika with good information too:

The Editor
Reply to  Debbie

Hi, Debbie – Thanks for writing and thanks for sharing that article.

We certainly didn't mean to be alarmist with that Ebola "shepherd's crook," rather it was intended to show the pitfalls of the Ebola "hot stock" trap that some investors experienced during media coverage of the West African outbreak. Rather than alarmism, we feel that a "long view approach" and careful stock research is the right move.

Sorry for the miscommunication. We'll get that fixed.

Thanks again for your comments.