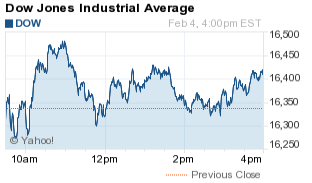 On the economic front, the Challenger report indicated layoffs hit their highest levels in six months in January. According to the report, retail and energy companies issued the most pink-slips last month. Meanwhile, the U.S. Labor Department reported that jobless claims jumped to 285,000 last week, far more than economists had anticipated.

Despite today's modest gains, investors still fear we're headed for a stock market crash, correction, or bear market. In this video, our Money Morning experts give their thoughts on the markets in 2016...