Many of my friends and colleagues in Silicon Valley are disappointed by the lack of Oakland Raiders or San Francisco 49ers in Sunday's big game.

But really, even with this community's two favorite teams missing, Super Bowl 50 could rebrand itself as the Silicon Valley Bowl.

First off, the Denver Broncos and the Carolina Panthers are set to square off in Santa Clara's Levi's Stadium, right in the heart of the Valley.

Moreover, CBS Sports is using the edgiest, most innovative camera technology I've ever seen to record and broadcast the game.

For instance, the pylon camera makes its Super Bowl debut this year. With these high-resolution cameras - stuffed inside all eight end-zone pylons - fans will get a field-level view of the action in 2K resolution. And the aerial Wildcat camera can travel 25 mph - twice as fast as previous SkyCams - along its web of wires above the field, meaning it can outrun the players.

But I'm most excited about a new replay camera system that gives one of the tech investing trends we've long been following here a Super Bowl debut. 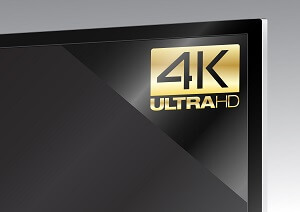 Sports broadcasting serves as a testing ground and showcase for TV and camera technology - after all, last year's game was the most-watched show in U.S. television history. And so the debut of this new replay cam tells me that ultra-high-definition television (UHDTV) is primed to become widely adopted by global consumers.

This technology is now so significant that it's beginning to disrupt the entire TV sector - enough so that UHDTV sets will earn a 50% market share by the end of this decade - making them a $30.4 billion market.

That's a market that promises to be highly profitable - and so we want to grab a piece of it.

The Coolest Replay Camera Ever

With this system of 36 UHDTV cameras placed around Levi's Stadium, the folks in the CBS production truck will be able to "freeze" any moment, "revolve" around it in 360 degrees, and then continue playing out the scene. Folks at home will be able to look at any play from the perspective of the quarterback... the safety... the wide receiver... or any other spot on the field.

I've seen some demos - and it's unlike anything we've seen before.

However, 5K may never really take off for TV manufacturers. (Keep your eye on 8K, though, in the future.)

That said, it's great for computer monitors. Graphic designers and other creative types love their 27-inch 5K iMacs. The image quality is stunning - if you are only a foot or two away from the monitor.

The real action right now - the place where we're directing our "investors' vision" - is 4K. In 2014, only 1% of U.S. households had these UHDTV sets, according to Strategy Analytics.

As with any new technologies, high costs were an initial barrier. Also, 4K technology was only available on the largest TV sets.

But as production volumes rose, prices fell, and the 4K technology started to appear on sub-50-inch TVs, sales took off. Look for sales of 4K sets to rise 10-fold this year, which should translate into a 10% share of the TV market.

That translates into manufacturers selling 103 million 4K TVs every year by 2020, according to Global Industry Analytics Inc. And in dollar terms, 4K TVs will represent a $30.4 billion market by then, according to Transparency Market Research.

Why will consumers feel compelled to upgrade? Because 4K sets have a 3,840 × 2,160 pixel count - four times better than the resolution of the high-definition pictures most of us are used to.

One problem. It's the old chicken-or-the-egg one.

The number of 4K sets we've all bought so far has been relatively low. And that means film and TV production firms have produced very little 4K content.

But with events like this Sunday's Super Bowl taking the lead, all that's about to change...

This will be the year that 4K sports broadcasting starts to go mainstream.

The National Basketball Association has already tested the technology on a few games.

Last year, the NBA became the first U.S. professional sports league to capture a game in 4K when the New York Knicks played the Milwaukee Bucks during NBA Global Games London 2015. That broadcast was available to an invite-only list.

"It was fabulous video, the most impressive thing I've ever seen video-wise," a Cisco Systems executive gushed to Wired magazine.

Then on Jan. 14, the Orlando Magic took on the Toronto Raptors at the London NBA Global Games 2016 for the first publicly available NBA game in 4K.

And now, Canadian cable giant Rogers Communications, which partnered with the NBA and BT Sport on those basketball games, is leading the way to bring 4K TV to the broader public. This year, Rogers will broadcast every Toronto Blue Jays baseball game and around 20 National Hockey League games in 4K TV.

Rogers has an incentive to make this technology work. It's also an Internet access provider and has made major investments in its networks in order to handle those bandwidth-consuming 4K images.

In a survey of broadcast technology professionals completed by Intelsat, 53% of responders said movies will be the real impetus for rapid consumer adoption of 4K TVs.

Netflix, for example, already streams popular shows such "House of Cards," "Breaking Bad," and "The Blacklist" in 4K.

For its part, Jeff Bezos' company offers an increasing amount of 4K streaming content - at no extra charge - through Amazon Prime. The amount of 4K content available on Amazon is far larger than what is currently available on Netflix.

That's a challenge that Netflix is sure to address in 2016. The firm plans to stream all of its future internally developed "Netflix Originals" in that format as well. Customers pay an extra $3 a month for the service.

And people like you and me are really starting to buy the sets needed to watch all this programming.

If that's still too much for you, those prices are starting to fall. By the end of this year, you'll likely be able to buy a state-of-the-art 4K TV set for well under $1,000.

Another company with a lot at stake here is consumer electronics giant Sony Corp. (NYSE ADR: SNE). Its Trinitrons were once the gold standard in television and earned the Japanese company huge profits.

They're loaded with highly advanced processors and lighting gear - and the crowds at CES found the Sony TV's image to be stunning. That said, I'm not recommending Sony right now due to the slowdown in China and the spread of economic worries to the rest of East Asia.

But with so much going on in this industry at an escalating pace, tech investors will soon have plenty of ways to make money from this trend.

And when I find the best way to play this sector, I'll be sharing this profit potential with you.

Stay tuned for that... and tune in Sunday to check out what those 36 5K cameras can do.

Double Your Money with This Tech Disruptor: The $40 trillion corporate bond market is ripe for disruption, and one small-cap tech firm is seizing the opportunity. As it drags this woefully outdated market into the connected, digital age, it could deliver investors 100% gains...