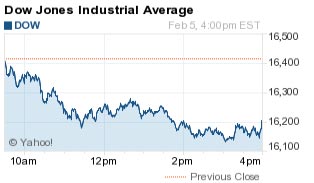 On the economic front, the unemployment rate fell to 4.9% in January, but the country only created 151,000 jobs. Economists expected 190,000 new jobs last month. This report likely puts the nail in the coffin for an interest rate hike in March. Payroll grew north of 200,000 and stronger hourly earnings would have boosted the case for the Fed to hike interest rates in March. However, the odds of a rate hike plunged below 10% today, according to CME FedWatch. This is the lowest "official" unemployment rate since 2008.

After today's losses, many investors fear we're headed for a stock market crash, correction, or bear market. Here's what our team of Money Morning experts predict will happen in 2016...