It's true, the LinkedIn stock price is plummeting 34% today (Friday) after the company announced weak guidance for Q1 2016. 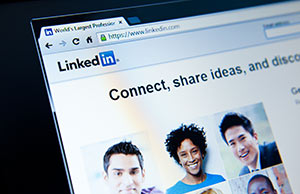 That's why Wall Street is panicking and LinkedIn stock is down 34% this morning. But instead of panicking, there's actually a better opportunity for investors to make money in the social media space.

For Q4 2015, the professional networking site actually beat expectations. LinkedIn reported $0.94 on $862 million in revenue. Analysts had expected $0.78 on $858 million in revenue, according to a consensus estimate from Thomson Reuters.

Despite those growth figures, the low guidance is the biggest story from the earnings report. And CFO Steve Sordello said the bleak guidance reflects pressure from international markets and global economic conditions.

But while investors are panicking, Money Morning has identified a way to make money in the social media space even as the LNKD stock price crashes. You see, one of LinkedIn's competitors is offering one of the best long-term investments on the market...

LinkedIn mentioned in its Q4 earnings report that it had increased competition abroad.

But it also has huge competition in the United States with Facebook Inc. (Nasdaq: FB).

Since July 2015, Facebook has been beta testing a business version of its social networking services, according to The Wall Street Journal. Over 60,000 companies applied to work with the social media giant, but Facebook ended up working with just 300 companies.

Facebook's goal is to make collaboration much easier between employees, and it is focusing on improving real-time interaction.

"Email is an inherently top-down method of communication meant for broadcasting information as opposed to exchanging it," Codorniou stated.

Facebook at Work will operate as a free model. Businesses that want analytics, integrations with current software, and more customer service options will pay "a few dollars per month, per user," according to Codorniou.

While Facebook may be viewed as a personal social platform, that is actually one of its biggest advantages. With over 1.59 billion monthly active users (MAUs), there will not be a huge learning curve.

Here at Money Morning, Facebook at Work is only one of the reasons we are bullish on FB stock. In fact, our Technical Trading Specialist D.R. Barton believes Facebook stock's rally is far from over.

Lots of money to be made