Americans spend their entire working lives paying for their Social Security benefits, and for decades it was a pretty good deal.

But that's changed, and it's getting worse every year.

"I think there is a pervasive sense that Social Security is a super deal that links back to an earlier era that is now past," Sylvester Schieber, a former member of the Social Security Advisory Board, told Investment News last year. 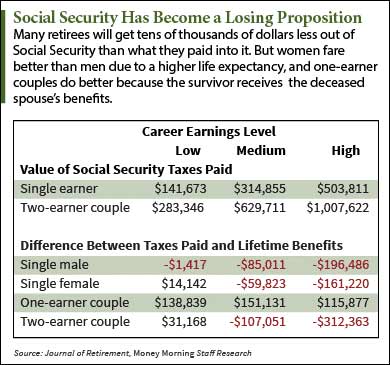 Social Security benefits were an incredibly good deal for millions of retirees for many years. And if you know how to make a few smart moves, Social Security can remain a good deal, as you'll see in a minute.

It's a fact that the earliest retirees had it the best. They paid relatively little into the system, but received full benefits.

Even decades later, Social Security provided a terrific return. According to a study published by the Urban Institute in 2013, a worker making an average salary who retired in 1960 could expect to receive more than six times as much money in Social Security benefits as they paid in taxes.

Those days are long over. An average-salary worker who retired in 1980 got a little more than twice the Social Security benefits as what he paid in taxes. Starting in the early 2000s, the equation began to flip to the negative for a lot of newly retiring workers.

Every year, the deal gets worse. Many of today's workers are guaranteed a loss on the money they contribute to the Social Security system.

Schieber crunched the numbers for a single, male, medium-wage worker. He'll get $85,011 less than he paid in taxes, plus a small amount of interest. A couple in which both earn medium wages will receive $107,051 less.

The gap will only grow larger over time.

Viewed as an investment, Social Security is a disaster. The same amount of money taken in Social Security taxes and invested almost anywhere else would yield a much bigger return, particularly considering the long time horizon of more than 40 years.

Certainly, any return on that money would be better than the huge losses the average retiree now gets stuck with. Unfortunately, Americans can't opt out of Social Security.

But that doesn't mean workers are helpless.

"One way that folks with a reasonable life expectancy can at least ameliorate the deadweight loss is to pursue claiming strategies that will maximize their expected lifetime benefits," Schieber said.

Few Americans realize there are hidden Social Security benefits that they could receive - if they know how to get them.

That's why Money Map Press has put together a package of reports to help American workers not just "even the score" when it comes to getting back the hard-earned money they paid into the system, but actually come out ahead.

And in some cases, way ahead.

Social Security Advisors, a high-end consultancy firm in Manhattan, say 71% of married couples are missing out on an average of $120,000 in Social Security benefits.

There's no reason to leave this money sitting on the table - after all, you've earned it!

To find out more about this special package -- and how to get everything you're entitled to from the Social Security and the federal government -- click here.

Wonderful!!! Then all the druggies and alcoholics on SSD rehab funds can go farm marijiuana, get rich, D.Trump won't have to cut off Seniors & Vets who actually paid in to SSI. The other portion of SSI(displaced immigrants) that has been a 'Great Chunk' of the Billions deficit, will be resolved by his plans to ship them back to their own country, leaving Americans with more chances of getting jobs in their own country. Time for Real Change? U betcha!!!

1. The federal government should balance budget every year..

2.private pension plans should not be allowed to be unfunded.

3.there should be no limit on social security taxes on income.