Oil "sages" everywhere are now calling for $40- to $50-per barrel oil by mid-year. By way of proof, they call on vague rumors of a Saudi-Russia deal to cut oil production, or costly shale oil producers collapsing, or the energy debt crisis.

You see, these pundits missed the largest ever one-day move in the oil markets, a shift of some $600 million.
The move and its result are indisputable proof of how the oil market has been manipulated. But, critically for us, it's the strongest signal yet that oil prices are turning around again.

The media completely missed this market-shaking event, but that doesn't mean you have to.

Calls for oil at $40 to $40 a barrel still put the price at less than half of where it stood in the summer of 2014, just before the collapse set in.

My algorithm to determine the "discount" on oil caused by the distortions of artificial manipulation puts it at $12 a barrel at close yesterday for WTI (the benchmark for oil futures contracts traded in New York).

With WTI hovering below $27, that effectively puts the actual market price at a shade below $40. That's hardly $70 or $80, but it will allow us to make some nice gains when buying returns in earnest to a distinctly oversold sector.

And return it will. Thanks in large part to that $600 million move I mentioned - an event that heralds the end of declining oil prices more than any other...

Why This $600 Million Shift Means Oil Will Rise 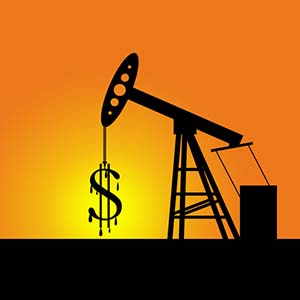 Despite what the pundits will tell you, this is not about a Russian-Saudi agreement to cut production, a wave of domestic company collapses in the above-cost shale operating sector in the United States, or the expected next phase of a constriction in high-risk energy debt.

It's true that all those factors will be having an effect shortly, but what happened last week is something else entirely.

Last Tuesday, the sale of a huge position in the VelocityShares 3x Inverse Crude Oil ETN (NYSE Arca: DWTI) hit, amounting to more than 1.8 million shares with a total value of over $600 million. Given the delay in transmission, these orders were actually filed on Monday.

WTI then spiked 8% on Wednesday.

An ETN, or exchange-traded note, operates much the same way as an exchange-traded fund (ETF). Both will track an index or equivalent. DWTI, for example, is pegged to the S&P GSCI Crude Oil Index Excess Return and provides a return equal to three times the inverse of that index's performance. Very simply, that means that if oil goes down $1, ETN will give investors $3.

However, there is one crucial difference...

This Was the Largest One-Day ETN Move Ever

While an ETF provides a return based on the underlying performance of the stocks in an index, an ETN is actually an unsecured, unsubordinated debt security meant to combine the performance of a bond with that of an index.

An over-weighted, inverse ETN like DWTI will be highly volatile when the underlying investment instrument fluctuates widely in price.

Remember, DWTI will return an inverse that is roughly three times the movement in oil. If oil prices are declining, DWTI will make an investor some nice cash, and quickly.

On the other hand, when oil is advancing, the losses can quickly add up.

Following this rise in oil and fall in DWTI - remember, three times as large - an unknown number of heavy players bailed out in one of the largest coordinated withdrawals from an ETN ever recorded in a single day, valued at $600 million.

Whatever else is happening, these players have clearly concluded the decline in oil is over.

Now, a move of this size has significant ripple effects.

Using data provided on the VelocityShares' website, the overall market cap of DWTI declined from over $1 billion to less than $420 million last Tuesday. It then sank to less than $325 million last Wednesday as a result of the large liquidation, and has settled at around $432 million currently.

Given that DWTI's market cap averaged about $200 million when the oil pricing curve was less volatile, this provides stark evidence that the anticipation of a downward movement in prices is a recent phenomenon.

But that's not all. The $600 million redemption that hit last Tuesday also had another effect...

Positive Effects for the Price of Oil Are Spreading

Credit Suisse, a Swiss financial services company, is the issuer of record for DWTI.

As our mystery oil players were redeeming $600 million worth of shares in DWTI, Credit Suisse was forced to buy back any short positions it was carrying - rapidly.

That, in turn, emphasized the decline in DWTI's market cap, providing additional fuel for a further rise in crude prices. This led to some rather pronounced spikes in trading volume of crude oil futures contracts.

The most intriguing element of this story, however, illustrates just how much pressure artificial moves to keep oil down can exert. On Wednesday, crude prices rose by 8%, completely ignoring what would normally have been news pushing prices down.

You see, on the following Wednesday, the U.S. Energy Information Administration (EIA) reported that weekly oil supplies had increased by a hefty 7.8 million barrels (supplies have since fallen). Of course, a surge in oil inventories of that size normally pushes oil prices down significantly.

Instead, exactly the opposite took place.

That shows just how oversold the oil market has been, and the force behind oil's upward pressure now that some of these artificial moves to keep oil down are lifting.

This "price event" means that the oil market will likely change rapidly in the weeks ahead. But it's also given us a setup we haven't seen in seven years - an opportunity to make what oil insiders call an "asymmetric trade." This kind of under-the-radar trade could make five times your money over the next 60 days... no matter where oil prices move from here. Click here to learn how it works...

I bet you that this $600M went to privileged investors. And will they pay it with their slush fund reserve ? Since I read Rick Green's Inside Wall Street, I'll never see the stock market the same way again.