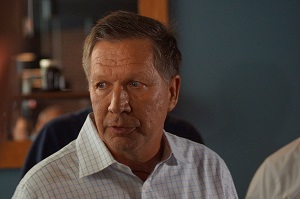 Billionaire businessman Donald Trump is maintaining his lead in the Republican presidential race as he and the other candidates approach Tuesday's primary in New Hampshire. Trump currently holds 30% of GOP voters' favorability in the state, according to the latest Monmouth University poll released yesterday.

However, the Monmouth survey revealed some surprising results: Ohio Gov. John Kasich is in second place in New Hampshire with 14% favorability.

No one saw that coming.

Monmouth also revealed that, of those surveyed, just half of likely GOP voters are completely decided on a candidate. Thirty-one percent have a "strong preference" but are open to other candidates. Twelve percent have only a "slight preference" and 9% are "undecided."

"While Trump's placement as the top finisher seems fairly secure at this point, the margin of victory and final order of the remaining candidates are still very much up for grabs," said Patrick Murray, director of the Monmouth University Polling Institute.

Many media outlets have speculated that Kasich has remained in the race thus far chiefly to secure a vice presidential spot. But the Ohio governor was adamant in an interview with CNN on Friday that he does not want to be a vice president. "I'd be the worst vice president anybody could ever imagine," Kasich said. "I'd be worse than Biden, because I'm my own man."