The tanking U.S. stock markets are just one symptom of a very, very sick worldwide economy, with at least 11 major economies in recession and the United States edging closer to one.

The collapse of commodities, contagion in the credit markets, slowdown of the debt-laden Chinese economy, and decline in U.S. markets are all bound up together. That poses a huge risk to investors who could find themselves with nowhere to go once the exits clog up.

Trouble is, fixing any one or even several of those profound crises won't deliver the global economy from disaster, let alone rescue investors.

Even worse, most of the efforts – like the money-printing craze that's so in vogue among the world's central bankers, or the hundreds of billions in ongoing stock buybacks – that are intended to fix or at least camouflage these systemic problems have only exacerbated them.

By no means can we count on our politicians to solve the problem. As we've seen so many times, politicians with the guts to try for painful but necessary structural reform have a funny way of not being re-elected.

The irony is, the reforms needed wouldn't necessarily be that painful. In this case, it's as easy as flipping a page on the calendar and throwing out the trash.

It's Time to Throw Out 20th-Century Ideas

Apple Inc. (Nasdaq: AAPL) CEO Tim Cook recently said something about the U.S. tax code that should be applied much more often to general economic thinking.

In response to criticism about Apple's tax practices, Cook said that we are applying a tax code built in the industrial age to the digital age.

In other words, the tax code is governed by a philosophy that may have been appropriate for an economy directed by tangible assets. But it is no longer effective for a globalized economy dominated by intangible and digital wealth.

The same is true of economic policy, which continues to be governed by outmoded beliefs about monetary policy derived from a world that no longer exists. Central bankers are guided by philosophies that were developed in a world far less leveraged and interconnected than that of 2016 – where central banks could exercise much greater control over the money supply, inflation, and employment.

Keynes' great treatise "The General Theory of Employment, Interest, and Money" was written in 1936 – an entirely different era – yet it still exercises enormous influence over economic policymakers seeking to stimulate economic growth. As a result, Keynesian prescriptions for printing money continue to rule despite their waning efficacy and the enormous damage they cause.

The world is desperately in need of a new economic regime – one that understands economic actors do not respond to low interest rates and other incentives as they did a decade or two ago. Very few people understand this – least of all economists, money managers, and financial writers.

Anyone who doubts this can simply look at the results writ large in the economy or in investment portfolios around the world.

A case in point can be found in a front-page article at the end of 2015, in The Wall Street Journal, entitled "Mystery of Missing Inflation Weighs on Fed Rate Move"… The fact that the Fed is mystified about inflation has to rank among the most profound intellectual failures in the history of economic and public policy (but then again, there are so many to choose from).

The True Root of the Fed's Failures 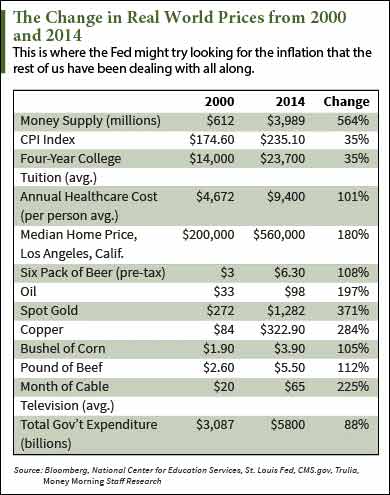 If the members of the Fed Open Market Committee (FOMC) can't find inflation, I suggest they start buying insurance… or paying for medical care… or buying beer… or paying for college or private school tuition… or going to the supermarket… or anything that is required for those of us living in the real world.

Only an economist would try to claim with a straight face that the prices of goods and services in the world – where actual, flesh and blood human beings live – are not rising sharply.

Now contrast that with the chart below, which shows what the Fed sees in its make-believe ballroom… 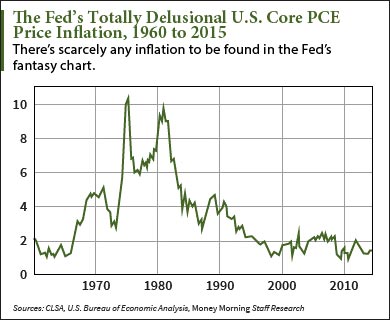 This completely delusional view of the world is what leads our central bankers to consistently screw up monetary policy and create one bubble after another.

Still they somehow retain the respect of a clueless financial press and a brood of Fed sycophants who mismanage their clients' money – exploiting the fact that most people do not have the faintest idea what the Fed is supposed to do or the least comprehension of concepts such as real or risk-adjusted returns.

We're all going to have to work that much harder to live through the economic carnage this is going to cause.

Investors Should Aim for This at All Times

Investors must begin to understand that they need to earn – at a minimum – high-single-digit, risk-adjusted annualized returns in order to maintain purchasing power and outrun the damage being done by central banks to fiat currencies.

Otherwise they are going to continue to fall victim to wealth managers and hedge fund managers who offer them consistent underperformance on an absolute, relative, and risk-adjusted basis, even as they charge egregious fees.

Most hedge funds, mutual funds, and other investments performed very poorly in 2015. And this is another demonstration that very few investors are capable of generating the kinds of high risk-adjusted returns necessary to sustain purchasing power under the current monetary regime.

Policymakers have simply failed to generate sustainable economic growth by printing more money. The money printed has come exclusively in the form of debt – it is impossible to conjure equity out of thin air.

The result is a global economy suffocating under all of this debt.

In the United States, the porcine spending bills passed by Congress are further evidence that regardless of who wins the White House in 2016, the prospects of reining in federal spending are zero. The U.S. government will continue to spend and borrow itself into oblivion while the Federal Reserve keeps devaluing the currency.

All the rest is just a cynical spectacle where politicians pretend to care about the public while they inflate their egos and line their pockets.

Investors who aren't consistently earning at least high-single-digit returns on their capital are falling further behind in their real (inflation-adjusted, i.e., fiat money adjusted) purchasing power.

The best way to do that is through looking at undervalued stocks, especially in markets that are still growing (although precisely because they're battering their own currencies) like the kinds we're following in Sure Money.

Furthermore, the consequences of all of this central banking and political mismanagement are about to catch up with us in a very big way. Investors who are short the broader U.S. markets, bonds all over the world, and currencies like the yen and euro will likely find themselves with the returns they need to stay ahead of those consequences.

Michael has found the one bank set to "blow up the world." It's sitting on top of a powder keg of $60 trillion in derivatives, and when it goes, well, the lucky ones will lose only their deposits. Others could lose everything. But he's making a recommendation that could make prepared investors a lot of money when this bank falls off the edge. Click here to get the recommendation, along with all of his Sure Money investor research at no charge.