The price of gold today is climbing 1.5%, or $17, to $1,190 this morning, continuing a strong run for the precious metal. Gold prices have now climbed roughly 12% in 2016 and should continue to climb even higher…

The price of gold today is climbing as stocks continue to be extremely volatile.

But there have also been some significant developments on a macroeconomic basis that have driven gold higher in the past week. 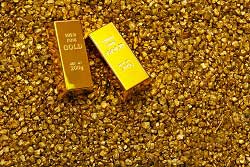 Why the Price of Gold Today Is Higher

On Monday, Feb. 1, gold prices started out around $1,120, but quickly worked higher to $1,127 and closed at $1,128. That's when I think the effect of the Bank of Japan's announcement it's going to a negative-interest-rate policy (NIRP) began to sink in.

Then Wednesday, Feb. 3, saw a surge in buying. That's when New York Fed President Bill Dudley commented that financial conditions had tightened since the U.S. Federal Reserve raised rates in December. He also said the additional strength of the U.S. dollar could have "significant consequences" for the American economy.

The dollar took a beating, which boosted gold prices. The price of gold closed at $1,142 on Feb. 3.

Last Thursday we saw considerable follow through, with gold starting out near $1,145 and surging again to $1,155.

What to Expect from Gold Prices This Week

Since gold is priced in U.S. dollars, a weaker dollar means it costs more to buy the same ounce of gold, all else being equal.

So here's what the dollar did recently… 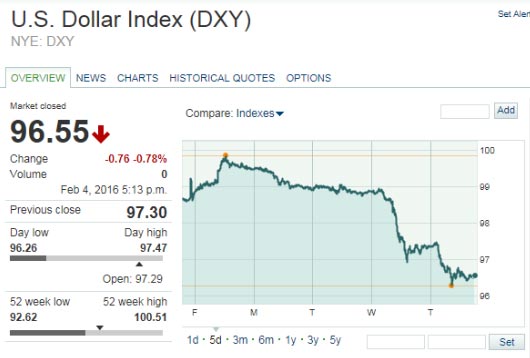 This is the biggest plunge in seven years, ever since the Fed said it would start its first QE program buying Treasury bonds. The DXY is off nearly 350 basis points just since Jan. 29.

Basically, the market is saying it doesn't believe the Fed will actually raise rates four times this year. My money's on the market and against the Fed.

But gold strength is not only about the dollar. Here are four major factors that will continue to drive the price of gold today and in 2016…

Data showed that Chinese manufacturing activity contracted further in January, making this the sixth month in a row. And a report on U.S. manufacturing showed it shrank for a fourth consecutive month.

There's been a lot of volatility, uncertainty, and fear. That's made for a potent combination helping to push the price of gold today higher.

We've also seen follow through in coin sales. The U.S. Mint reported that 124,000 ounces of American Eagle gold coins sold in January, up 53.1% over the previous January and the most since September.

And exchange-traded fund (ETF) inflows have also remained robust. On Feb. 1, another 12.8 tonnes were added to the SPDR Gold Trust (NYSE Arca: GLD), the world's largest gold ETF, making it the largest daily inflow since the middle of December. That produced an 11-day positive streak.

And finally, in a webinar produced by the World Gold Council, Director of Investment Research Juan Carlos Artigas pointed out that gold's five bear markets since the 1970s were quite similar "in terms of length and magnitude." Typically, these have run from 47 to 52 months, and we're currently at 50 months.

So all of this has helped make gold the top-performing commodity so far this year, according to Bloomberg Business.

Those four factors will continue to drive prices higher throughout 2016.

The Essential Guide to Buying Gold and Silver: Precious metal investing is widely regarded as the best "crisis insurance" for your portfolio. This guide gives you everything you need to know about the best stores of value in history, gold and silver. Read more…
Join the conversation. Click here to jump to comments…