Lockheed Martin stock is Money Morning's Pick of the Week.

One of the primary U.S. defense contractors, Lockheed Martin Corp. (NYSE: LMT) is a stock that can serve as a counterweight to the current market volatility.

Lockheed Martin: About the Company

Lockheed Martin has an incredibly rich history. It traces its origins to the Glenn L. Martin Company and Lockheed Aircraft Company,

both founded in 1912. The Glenn L. Martin Company found success with the MB-1 biplane bomber in World War I and the B-26 Marauder during World War II. Martin also built the Titan and Atlas series of booster rockets, as well as the Viking Mars probes, for the National Aeronautics and Space Administration (NASA). It merged with American-Marietta in 1961 to form Martin Marietta Corp. Meanwhile, Lockheed made a name for itself early in building civilian aircraft, such as the Model 10 Electra flown by Amelia Earhart. Lockheed switched to military production for World War II and developed the P-38 Lightning fighter. During the war, Lockheed also created its secretive "Skunk Works," which created the P-80 Shooting Star (an early jet) as well as the U-2 and SR-71 Blackbird spy planes, and more recently the F-117 Nighthawk stealth fighter. Martin Marietta and Lockheed merged in 1995 to become Lockheed Martin. Today the company is headquartered in Bethesda, Md., and employs 126,000 people worldwide. 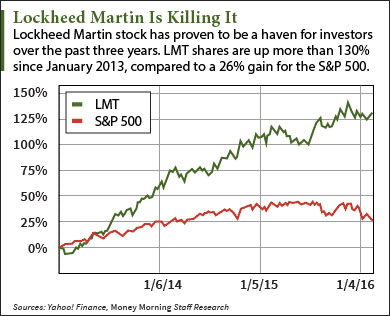 But despite the impressive gains, Lockheed Martin stock still has much to offer new investors...

Why LMT Stock Is a Buy

As a mature company, Lockheed Martin stock isn't likely to deliver huge gains. But for the kind of turbulent markets we've seen so far in 2016, LMT stock is ideal. It has a track record of outperforming the market in good times and hanging on to gains in rough times.

"Management has a history of dramatically increasing payouts," Fitz-Gerald said in making his case for Lockheed Martin stock. "Plus, the company is tapped into what I like to call an Unstoppable Trend - War, Terrorism, and Ugliness. That's one of the biggest Unstoppable Trends of all."

And Lockheed has scored some big wins lately.

This year Lockheed is ramping up production of its F-35 Lightning II fighter - a $400 billion contract for more than 2,400 planes customized for the U.S. Air Force, the U.S. Navy, and the U.S. Marines.

"Lockheed Martin is doing great on the contract side," Barton said, "but they have an ace up their sleeve. Their cybersecurity consulting group is growing and is one of the strongest in the world. That's going to help them get money outside the defense sector."

When it comes to LMT stock, there's no reason to wait. The stock has sailed virtually untouched through the past three months of volatility - in fact, it's actually up 0.71%. And while this is more of a defensive play (no pun intended), the one-year price target of $234.87 represents a 9% gain from the current price of about $215.50. Add in the 3.1% dividend and you have a stock that will reward you no matter what happens in 2016.

Best Stocks for a Tough Market: Lockheed Martin is just one option for dealing with market volatility. Money Morning's experts have several strategies not just for surviving a down market, but for making money while everyone else is running for the exits. Here are some of our best ideas right now...