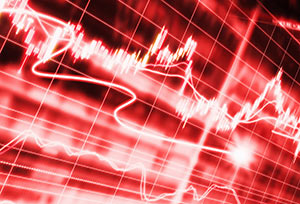 A stock market crash is a sudden decline in stock prices across multiple sectors. It's often triggered by fear and panic, which differs from a profit-taking market sell-off.

The most recent example of a stock market crash was in 2008.

We likely won't see a major stock market crash like those in 2016, but there is no denying we have reached bear market territory...

Since hitting a high in May, the Dow Jones Industrial Average is down nearly 13%. What's worse are the stock markets' major volatility this year. Major swings have left investors questioning their investments every day.

The VIX index (INDEXCBOE: VIX), which measures the volatility of the S&P 500, is up 51%. The VIX is a strong indicator of the amount of fear in a market. Its sharp rise shows that investors are capitulating -or panic selling - so they can get out of the market into less risky investments.

Investors' concerns are warranted though...

"China is a house of cards whose debt-engorged economy hit a wall in mid-2014 after seeing its total debt grow from $7 trillion in 2007 to $28 trillion (it is now probably over $30 trillion)," said Money Morning Global Credit Strategist Michael Lewitt.

While we're not yet experiencing a full-fledged stock market crash, we are in a bear market. And it's always smart to prepare for the worst.

That's why our experts have developed a plan for investors to protect their money in 2016 and even profit from the falling market...

How Protect Yourself from a Stock Market Crash in 2016

Even when the markets are posting huge losses, other profit-making opportunities abound, according to Money Morning Options Trading Specialist Tom Gentile.

"The bull market's end gives traders the juiciest opportunities ever," he said.

In early January, the Dow declined by more than 900 points. While most investors were reeling in fear, Gentile's subscribers were posting 100% returns.

Every week, Gentile discusses his favorite market moves. Check out a brief introduction to his trading strategy here.

He invests in high-quality stocks that sell products with incredible consumer demand. These are positions that you plan on holding for the next five to 10 years.

Fitz-Gerald explains that stocks like these aren't speculation; they're dependable investments based on stellar earnings reports and balance sheets.

The Bottom Line: We likely won't see another stock market crash in 2016, but we are in a bear market. Even so, there are ways investors can protect and grow their money, especially if they follow the tried and tested guidance of our Money Morning experts.