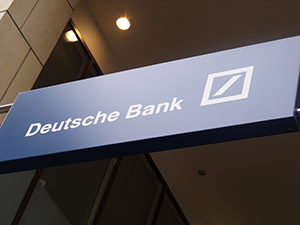 Deutsche Bank's shares slipped 2.57% to a record low of $14.83 yesterday. This was after they plummeted 9.5% on Monday. The European investment bank's share prices have fallen more than 40% this year.

And it smacks of a scenario we've seen before - one that sent the global economy reeling almost eight years ago...

Releasing a forced statement to the worrying public is something Lehman Brothers did just before it collapsed in 2008. The now-defunct corporate banking giant assured investors that it had enough liquidity to weather the financial crisis in 2008.

Yesterday, Deutsche Bank did the same thing. It released a statement stressing there is no liquidity crisis, but conceded that capital fears were right. According to a Wall Street Journal report yesterday, the bank promised "it would have more than enough to pay the €350 million ($392 million) on existing bonds this year and next. Deutsche Bank added that in 2017 its available funds should be more than 7.5 times this coupon bill, before accounting for this year's earnings and expected asset sales. That is important, as the bank needs to sell more of these bonds."

Another similarity between Deutsche Bank and Lehman Bros. can be extrapolated from credit ratings. In 2008, there were few warnings that Lehman was in trouble before ratings agency Fitch issued a negative outlook on the bank in June 2008. That was three months prior to its Sept. 15, 2008, fall.

On June 15, 2015, ratings agency S&P cut Deutsche Bank's rating in much the same way, following the ousting of the bank's co-chiefs Jürgen Fitschen and Anshu Jain.

And these forced resignations themselves echo a pre-crisis Lehman pattern. On March 10, 2008, the investment bank revealed that it would be laying off 5% of its workforce.

On Oct. 29, 2015, Deutsche Bank released a statement revealing that it would cut 35,000 jobs over the next two years in an effort to cut spending.

This extreme volatility reminds us of the headline-inspired mayhem that rocked the market eight years ago. Shares of Lehman Brothers soared 16% on Aug. 22, 2008, when news broke that Korea Development Bank was considering buying it.

Three weeks later, Lehman announced it was filing for bankruptcy and closed its doors.

Stay informed about other stock market crash indicators by following us on Twitter @moneymorning or liking us on Facebook.

Sanders' Aide Makes a Spectacular Blooper: Democratic presidential hopeful Bernie Sanders' campaign has thrived on pushing one theme repeatedly: that he's not part of the "establishment." But that's simply untrue. Here's how we know the Vermont senator belongs to the one group he despises the most...