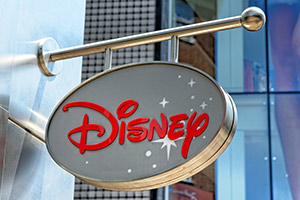 Disney stock is down almost 13% this year and 21% in the last three months. And it's down nearly 5% this morning (Wednesday), even after a strong earnings report.

We're still bullish about Disney for one big reason. But first, here are Disney's earnings results...

In its best quarterly earnings ever, Walt Disney Co. (NYSE: DIS) earnings per share (EPS) jumped to $1.73 a share from $1.27 a share in the same quarter last year.

But not every number in the Disney earnings report was bullish... Although its studio entertainment segment led its revenue surge, Disney's network operating income dropped 6% year over year.

Investors are also concerned about the loss of Disney's cable network subscribers, most notably at ESPN. The sports network accounts for a 52% of Disney's network operating income.

Disney is losing most of its network subscribers due to cord-cutters, a term for former cable subscribers that switched to steaming services like Netflix or Apple TV.

Cord-cutting, however, will actually benefit Disney in the long term. That's because new streaming platforms have smaller channel offerings than traditional cable companies. And these platforms want to offer the best content available. Because Disney's networks like ESPN and A&E are so popular, it has the leverage necessary to negotiate profitable contract deals.

The latest "Star Wars" installment has also failed to boost the Disney stock price, despite generating over $1.5 billion in domestic box-office revenue.

However, "Star Wars" did help Disney almost double its studio operating income to $1 billion in the quarter.

For investors worried about the falling Disney stock price after a solid earnings report, there is one major catalyst that will drive Disney stock higher in 2016...

The Biggest Catalyst That Will Boost Disney Stock in 2016

The Bottom Line: Disney's three new revenue streams will continue to make up for any losses in its cable network segment. As cord-cutting becomes more popular, Disney will benefit as it negotiates deals with smaller, more selective streaming services, instead of cable companies. Disney stock is one to hold for 2016.