Two new developments have sparked fresh interest in SpaceX stock this week, leaving investors asking when we will get a chance to invest in Elon Musk's company.

First, here's the news that has investors talking about SpaceX stock this week…

SpaceX announced it will attempt its next sea-based landing on Feb. 24. In the event of weather or technical issues, a backup launch date of Feb. 25 has been set.

SpaceX will be launching a new SES-9 satellite via one of its Falcon 9 rockets. The rocket will likely touch down at sea after the mission. A sea landing is the only option if the rocket doesn't have enough fuel to make it back to land. 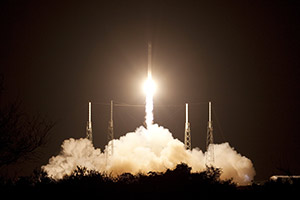 A successful sea landing would make history for SpaceX. It attempted a sea landing on Jan. 17, but a "hard landing" amid rocky seas caused one of the rocket's landing legs to break. It was the company's third unsuccessful attempt.

The company's two prior ocean-landing attempts in 2015 were thwarted by mechanical and fuel issues.

Another news story sparking interest in SpaceX stock was the company's announcement that it will start mass producing its Falcon 9 rockets.

To date, the company has only been building a limited number of rockets annually. But in a recent speech at the annual Commercial Space Transportation Conference of the Federal Aviation Administration, SpaceX President Gwynne Shotwell noted the company is ramping up production.

SpaceX is expected to start producing approximately 18 cores (boosters) each year. The company currently averages between six and eight a year.

"By the end of the year we should be at over 30 cores per year," Shotwell said. "So you see the factory start to morph."

By the end of 2016, the company will also carry out Crew Dragon spacecraft tests. During 2017, two demonstration flights will take place. The first one will fly without a crew, while the second one will fly with astronauts. If successful, the spacecraft will be ready for its first space mission.

The Falcon 9 launched successfully six times in 2015. However, company officials say they need to at least double that annual rate to keep pace with backlog. Preliminary launch schedules show two more launches in the upcoming months.

Musk said it might take several years for SpaceX to establish procedures and timetables for testing and then relaunching used rockets.

In the meantime, investors will continue to clamor for a SpaceX IPO and SpaceX stock. Here's what we know about a possible SpaceX IPO in 2016…

SpaceX was founded in 2002 by Elon Musk, best known as CEO of Tesla Motors Inc. (Nasdaq: TSLA). Its founding mission was to reduce launch and transportation costs and to ultimately enable the colonization of other planets.

SpaceX first gained recognition in 2011 when NASA awarded the company $75 million to develop a revolutionary launch escape system. That system is designed to enable the company's Dragon spacecraft to carry astronauts.

In early January, SpaceX was one of three companies awarded NASA contracts valued at several billion dollars for commercial cargo deliveries to the International Space Station through 2024. SpaceX's cargo missions to and from the ISS will start in late 2019.

The quarterly impulses of fickle investors could be damaging to SpaceX's long-term goals. Since SpaceX's inconsistent long-range goals wouldn't be "super loved by the markets," it doesn't make sense to take the company public.

"It [SpaceX] will go public once we have regular flights to Mars," Musk told investors.

The Mars Colonial Transporter is part of Musk's spaceflight system that will shuttle humans to and from Mars. In 2011, Musk said he hopes to be able to do this "within 10 to 20 years." So despite the demand, it looks like we are still years away from investing in SpaceX stock.

While investors must wait for a SpaceX IPO, a handful a notable companies will make their Wall Street debut this year, and they all have the potential to bring in market-beating gains. Here's the five most important IPOs of 2016 to watch...

Musk has said it time and time again, no SpaceX IPO until they reach Mars and develop the MCT. And even then it is not guaranteed.

There is no point in having an IPO just for the sake of having an IPO. The reason to have an IPO is to raise cash. Reusable rockets will not require more cash, the opposite, it will increase cash.

The only step that requires a lot of cash is building a colony on Mars. But SpaceX has over 10 years to build up their pockets. So they may not even need it.

As Weapon said in the previous comment, Elon Musk said MANY TIMES that Spacex will not be opened to investors until he has reached his goal to establish a first colony on Mars.
The reason is that he wants full-control of Spacex and not be harassed and disturbed (or even "dethroned") by incompetent people.

Short answer : NO.
this is a nonsense article.
enjoyable FUD.