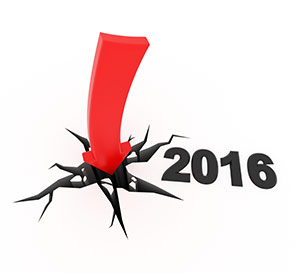 The Dow Jones Industrial Average is off nearly 13% from its May highs. And the Nasdaq is down 17% from its July highs.

The steep drop in the major indexes has investors worried about a recession in 2016.

But first, what is a recession?

A recession is two consecutive quarters of negative economic growth, which is measured in gross domestic product (GDP).

Our last major economic recession was in 2008. In the third fiscal quarter of 2008, the U.S. economy was logging -1.9% GDP growth. In the following quarter, that number dropped to -8.2%. That was the start of one of the worst economic recessions since the Great Depression.

That recession lasted four quarters and has since been named the Great Recession. The Great Recession ended in 2009. Since then, we've posted six consecutive years of positive annual GDP growth.

In fact, many countries are currently in a recession right now, including: Greece, Belgium, Italy, Portugal, Netherlands, Czech Republic, Venezuela, Brazil, Russia, Taiwan, and as of last week, Ireland.

"I believe the United States is closer than anyone realizes to joining them," said Money Morning Capital Wave Strategist Shah Gilani.

Gilani is considered one of the world's foremost experts on the credit crisis and has more than 30 years of experience as a trader. He ran his first hedge fund in 1982 from his seat on the floor of the Chicago Board Options Exchange.

In March 2009, Gilani published a front-page article about an oncoming bull-market "stampede," which later turned out to be the longest bull-market run since World War II. In December, Gilani predicted the Dow's decline toward 15,000 in January.

Here's why he thinks the U.S. economy is now heading toward a recession in 2016, and what that means for your money...

What Is a Recession? Here Are Some of the Signs

The United States had an annual 2.4% GDP growth rate in 2015. So from a technical standpoint, we still have a ways to go before hitting an economic recession in 2016.

But there are other indicators - many of them, actually - that show strong warning signs for economic turbulence ahead, according to Gilani.

One of the most reliable predictors of a recession is the Institute of Supply Management Index (ISM). The ISM consists of more than 300 manufacturing firms, and its drop in 2008 foreshadowed the Great Recession.

A reading below 50 on the ISM report indicates contraction in the manufacturing industry, while a reading above 50 indicates expansion. The most recent ISM report was 48.2. That's four months in a row that the index has been below 50.

When key industries - like manufacturing - are contracting, the U.S. economy usually falls back on consumers to spur growth.

But that won't happen this time, according to Gilani.

U.S. consumers, who are responsible for three-quarters of GDP growth, aren't spending.

The U.S. Commerce Department reported spending on durable and nondurable goods each fell 0.9% in December - the most important quarter for retailers.

In 2015, retail sales were also the worst since 2008-2009. And there is little evidence to say consumption will improve in 2016, with consumer wages only increasing 2.2% in the past five years.

In fact, we're in the midst of a stock market sell-off. The Dow is down nearly 7% since the start of January.

Investors are capitulating - or panic selling - over fears of falling earnings or a stock market crash.

Sell-offs don't always portend an economic recession. But this one does, according to Gilani.

"Between faltering industrial production in the United States and across the globe, retrenching consumers here and elsewhere when layoffs will be announced in the first quarter and all year, and stock market investors selling on account of rapidly diminishing earnings in the face of escalating currency wars, the warning lights couldn't be any brighter," Gilani said this week.

And while those asking "what is a recession?" might be concerned about Gilani's answer, you don't need to get caught off guard.

In fact, Money Morning experts put together an entire investing guide that's built to last in a recession. It will help you protect your money, and even profit, when the markets are falling...

Gilani is looking at another "easy money" setup like the one he found for his readers in 2015. This calls for the same simple trading technique that one of the world's greatest traders used to make the "easiest" $80 million ever. In fact, this setup made another famous investor as much as $1 billion... in a single day. It's been making people rich for 87 years, and with all the volatility in the markets today, it's become even more effective, with dozens of opportunities for one-day windfall profits. Click here to find out how you can make this trade every day...

I am long on Sunedison SUNE and Dr. Kent said that hedge funds would move against it. Would you ever recommend shorting it? Your thoughts please MK